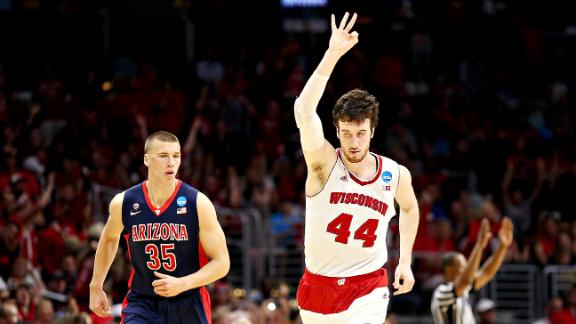 Frank Kaminsky and Jahlil Okafor are as different as stories can be in college basketball. The two, however, have a lot in common -- both are in the Final Four and both were the top selections on The Associated Press' 2014-15 All-America team.

Kaminsky, the 7-foot senior from Wisconsin, was a unanimous choice Monday. Okafor, the 6-11 freshman from Duke, received all but one first-team vote.

Kaminsky worked his way to the top by improving through four seasons in college. Okafor arrived with all the laurels out of high school and immediate talk about leaving for the NBA.

"Not to be overly patriotic, but we're an American story, that you can do that in this kind of a system," Wisconsin coach Bo Ryan said. "Sometimes where it looks like the privileged, the ones that are identified as being great players and can't-miss-type guys, where there can always come that guy from behind in the race and then cross the tape first.

"Frank is that guy who got a little bit later start as far as people noticing his abilities, but that's just a great accomplishment on his part. ... He took advantage of a chance and has made the most of it."

Kaminsky, projected as a top pick in the NBA draft, led the Badgers to their second straight Final Four berth, averaging 18.2 points and 8.0 rebounds while shooting 55.3 percent from the field, including 39.5 percent from 3-point range.

He is one of those big men who is as comfortable on the perimeter as in the lane and his outgoing personality has made him a media favorite.

"It's cool to be named first team All-American. It's something you dream of as a kid," Kaminsky said. "To finally be able to do so, it's a good thing and it shows how hard I've worked in my career. To be up there with Alando Tucker is a pretty cool thing."

Kaminsky is Wisconsin's second All-America joining Tucker in 2007. He is the second unanimous pick in as many years following Doug McDermott of Creighton.

Okafor is Duke's 16th first-team All-America and is the Blue Devils' second freshman in as many years, with Jabari Parker being chosen last season.

Okafor, who received 64 first-team votes, averaged 17.7 points and 9.0 rebounds while shooting 66.9 percent, second in the nation.

"His game has grown continuously and he's got a lot more growth ahead of him," Duke coach Mike Krzyzewski said. "The main thing for Jah is that he's gotten better as the season's gone along."

At Notre Dame, Grant's career was in jeopardy last season when he was suspended for the second semester for what he called an academic mistake. The son of former NBA player Harvey Grant star returned for his senior season and averaged 16.8 points and 6.6 assists while playing 36.6 minutes per game.

"I can't think of a better comeback story in college basketball the last couple years than Jerian," Notre Dame coach Mike Brey said. "When I told him you need to come back because we have unfinished business, I didn't know it would be this good and I am thrilled that it is this good because I was nervous it wouldn't be this good. He came back for all the right reasons."

Grant, who received 53 first-team votes and is Notre Dame's first All-America since Troy Murphy repeated in 2001, said receiving an honor like this makes his decision to return that much sweeter.

"It's great, especially with where I was last year," he said. "The work I've put in, the guys having so much confidence in me to welcome me back like that."

Cauley-Stein and his teammates are chasing history with an undefeated season just two wins away. The 7-footer is the first first-team All-America to average less than 10 points per game. He averaged 9.3 points while grabbing 6.4 rebounds and shooting 58.8 percent. He anchors Kentucky's stifling defense.

"Coming in I felt like I was really overlooked and didn't know if I really belonged but just worked and worked and worked and eventually became a player that everybody looks at like Dude, you're a freak athlete, you're a beast," said Cauley-Stein, who received 45 first-team votes. "You can do so many things that I never imagined even happening and now it's coming together."

He is the 18th All-American from Kentucky and first since Anthony Davis in 2012.

Russell is another freshman who isn't expected to be back for a second season. He averaged 19.3 points, 5.6 rebounds and 5.1 assists and received 51 first-team votes. Russell is 15th All-American from Ohio State and the first since Jared Sullinger repeated in 2012.

"The level that he sustained was the most impressive thing," Buckeyes coach Thad Matta said. "The other thing that I loved was that the mistakes early, he learned from. He got better as the season went on. He became a more complete player. We knew he was going to be really good but just seeing his dedication to becoming a great player was very, very impressive."

The voting, by the same 65-member media panel that selects the weekly Top 25, was done before the NCAA tournament.