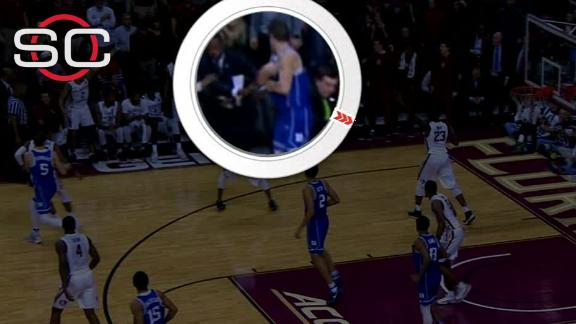 Florida State assistant coach Dennis Gates was adamant that a collision with Duke guard Grayson Allen on the Seminoles bench on Tuesday, in which the player made contact with Gates, was purely a "basketball play."

"Grayson Allen did not make a dirty play," Gates told ESPN on Wednesday morning. "That was not a dirty play. He plays hard, he dove after a loose ball. I should have been sitting down, but I wasn't. My intent was to absorb the contact. His hip hit my hip and that's what people aren't looking it. That's a basketball play. Not a dirty play."

Allen, in his third game back since serving a one-game suspension for tripping an opponent (his third such incident in the past 10 months), crashed into Gatesas he was falling into the seats late in the Blue Devils' 88-72 loss.

The play, which came as the No. 9 Seminoles were leading the No. 7 Blue Devils 75-61 with 6:00 to play in the second half, went under the radar after the game, with no known references from coaches or players of Allen's shove.

Allen and Gates both ended up prone on the floor amid several collapsed courtside chairs.

Allen then left the game with an apparent head injury suffered during a play less than 30 seconds later and did not return.

Gates played at Cal and has been on the Florida State staff for the past six seasons. With Allen running full speed at 202 pounds, Gates told ESPN he would have fared worse if Allen was intentional with his actions.

"We teach kids to run down loose balls and make hustle plays," Gates said. "That's what he did. He was just trying to get back in the play.

"Out of reaction, he put his hands up to protect himself," he continued. "He didn't push me. He was just protecting himself."

Gates also told ESPN there was no verbal exchange from Allen.

"No words were exchanged on the play," he said. "It was just a basketball play."

A statement issued by the ACC stated, "There is nothing conclusive that can be determined" as to whether Allen intentionally made contact with Tava's leg or foot.

Every time Allen touched the ball or lined up at the free throw line Tuesday, he heard thunderous boos. There was a sign likening him to a toddler. Another mocked him for being stripped of his captaincy. He mustered nine points with five assists and three turnovers.

Duke interim head coach Jeff Capel, who is replacing Krzyzewski while he recovers from back surgery, said he didn't believe Allen was affected by the hostile environment.

"I don't think what other people say, chant or do wears on him that much," Capel said. "The kid has been through a lot -- he brought a lot of it on himself, but some of the things that have happened are just crazy.

"I am not talking about the chanting; that stuff happens on the road with a really good crowd, and they had a really great crowd tonight. But I don't think that wore on him. I think Florida State's defense and their relentless pressure did."

Information from ESPN's Jenna Laine was used in this report. 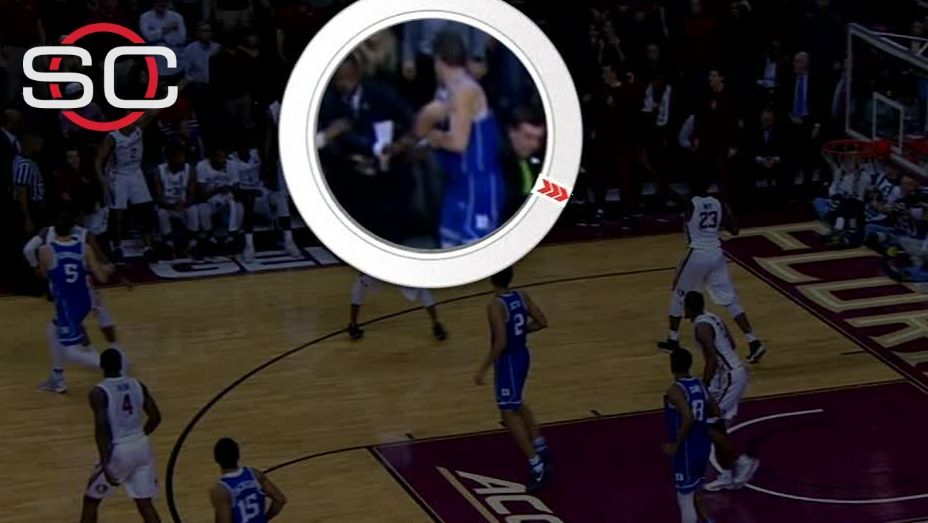 Grayson Allen appears to shove FSU assistant
Duke guard Grayson Allen makes contact with a Florida State assistant coach as he falls onto the bench in the second half of the Blue Devils' 88-72 loss to the Seminoles. 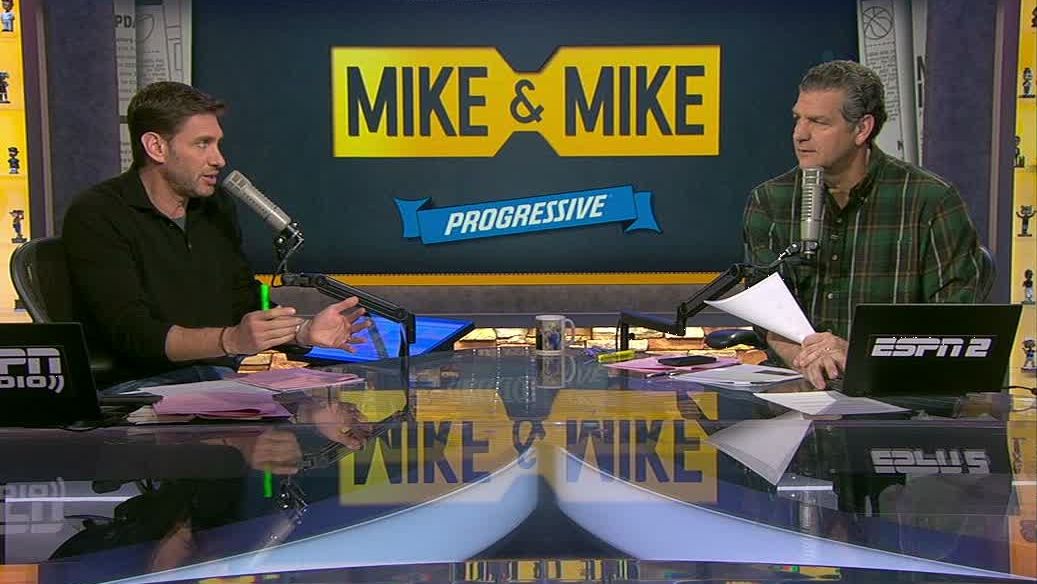