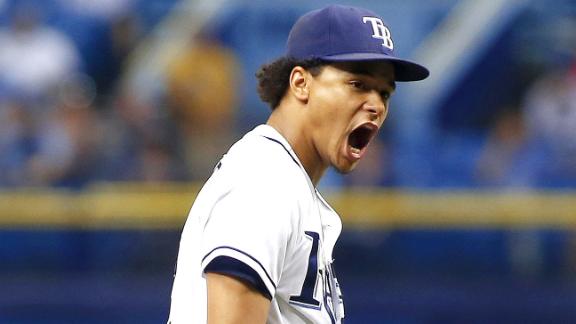 Two Kansas City Royals pitchers were added to the American League All-Star roster Monday, which brings Kansas City to an MLB-high six representatives, while New York Yankees designated hitter Alex Rodriguez was left off the team for the Midsummer Classic.

Wade Davis and Kelvin Herrera were selected by player vote and manager Ned Yost, respectively. They will join four position player starters who were elected by fan vote and announced Sunday.

"The one thing that Kelvin did that a lot of these guys didn't do was pitch in Game 7 of the World Series last year," Yost said. "That was kind of the deciding factor for me."

There was no room on the roster for Rodriguez, enjoying a renaissance in his return to the Yankees following a season-long drug suspension.

"As I've said all season, my No. 1 goal is helping the Yankees win a championship. I'm excited that we're in a good position to get there," Rodriguez said in a statement. "Of course it would have been an honor to represent the American League next week, but I'll have fun cheering on the guys who were put on the team and watching them protect home field."

Rodriguez is among the top three AL designated hitters in five offensive categories: batting average (.284), home runs (16), hits (77), on-base percentage (.390) and runs (45). He has a higher WAR than Nelson Cruz, who won the DH voting, but Rodriguez was not selected for his 15th All-Star appearance.

"We spent a lot of time debating his name," said Yost, who preferred the versatility of an extra infielder or outfielder. "We felt we were covered in the DH. ... We wanted to get Alex Rodriguez on there and couldn't."

The Royals have a chance for a seventh All-Star, as Mike Moustakas was listed for the Final Vote. Fans will select among him, Xander Bogaerts, Yoenis Cespedes, Brian Dozier and Brett Gardner for the last AL roster spot.

Among the other AL All-Stars, Albert Pujols was tabbed for his 10th All-Star team. He will start in place of Miguel Cabrera, who was replaced on the roster by Mark Teixeira.

On the National League side, Andrew McCutchen will replace Giancarlo Stanton as an outfield starter, and Chicago Cubs rookie Kris Bryant was added to the NL roster by manager Bruce Bochy.

Bryant became an All-Star lessthan three months after making his major league debut. He was one of two rookies selected along with Dodgers outfielderJoc Pederson.

"I've been at some all-star games, but I don't think anything can compare to making the major league All-Star team," Bryant said.

Bryant said he is open to participating in the home run derby, as did Pederson.

"It's all happened so quick. I've just been having so much fun with this, my baseball career," Bryant said. "Right now, it's a pretty special feeling for me."

Another potential injury replacement is for outfielder Matt Holliday, who is currently on the disabled list with a quad injury. If he can't play in the game, Pederson will replace him as the starter and Bochy will select another bench reserve.

Pittsburgh pitcher A.J. Burnett, in his 17th and what he says will be his final season, became an All-Star for the first time. At 38, he is the oldest player headed to the game.

"It's cool," Burnett said. "We were hoping it would happen, but like a lot of things in baseball, it was out of our control."

"New team. New league. It's just getting a look at everybody,'' said Scherzer, who left Detroit to sign a $210 million deal with the Nationals. "Everybody's getting their first look at me and the things I've done. I'm sure they'll make adjustments the rest of the year. That's why it's going to be a difficult challenge for me.''

The Cardinals lead the NL with five players on the All-Star roster. They could extend their lead with a sixth if Carlos Martinez is added to the team via the Final Vote, or they could be tied by the Dodgers if Clayton Kershaw is voted to the final roster spot. Johnny Cueto, Jeurys Familia and Troy Tulowitzki complete the NL's Final Vote ballot.

Kershaw, the reigning Cy Young and NL MVP, said he didn't expect to be chosen for the All-Star team: "I wasn't expecting it. ... I had no expectations one way or the other."

There are 16 All-Stars born outside the United States, with six Venezuelans, five Dominicans, three Cubans, one Canadian and one Puerto Rican.

The All-Star Game will be played in Cincinnati for the first time since 1988. Closer Aroldis Chapman will join third baseman Todd Frazier as the Reds' representatives on July 14.

Information from The Associated Press and ESPN's Wallace Matthews and Mark Saxon contributed to this report.

AL announces All-Star reserves and pitchers
The Baseball Tonight crew breaks down if anyone was snubbed from the American League All-Star roster and who should start at pitcher for the team.

NL announces All-Star reserves and pitchers
The Baseball Tonight crew discusses who should start at pitcher for the National League and the amount of young players that made the team.