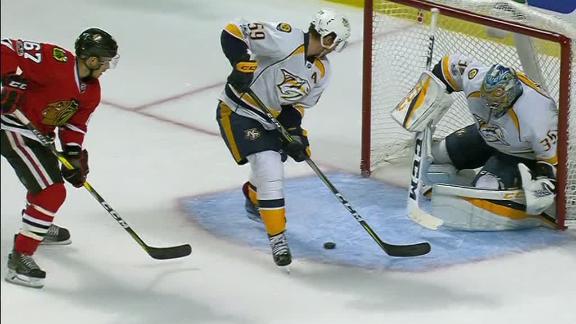 Joe McDonald: Not only did Predators goalie Pekka Rinne stand on his head, he announced his presence with authority, and now the Blackhawks have been reminded the first-round series won't be easy. It was obvious from the opening puck drop that Rinne was dialed in. He made timely saves time and again, and never seemed rattled by Chicago's offensive onslaught. Rinne has been solid, and after his Game 1 performance, the Blackhawks have their work cut out for them.

Scott Burnside: I like that the Predators got the only goal they needed from their top line of right wing Viktor Arvidsson, center Filip Forsberg and center Ryan Johansen, who earned an assist on Arvidsson's winner. There has been criticism of Johansen, and general manager David Poile paid handsomely for the franchise center, sending defenseman Seth Jones to the Columbus Blue Jackets midway through last season. But if the Preds are going to make good on all that preseason optimism, they're going to need Johansen to be the force they imagined he could be when they made the deal. So far, so good, though, for the Preds.

Corey Pronman: I'd disagree with the "heavily favored" part, given I've picked the Preds to win this series. Overall, I think the matchup is quite even, and we could see close games the rest of the way. Nashville has several high-end skaters in defenseman P.K. Subban, defenseman Roman Josi, Forsberg, Arvidsson, defenseman Ryan Ellis and Johansen. They might not have a Patrick Kane, but there's enough depth in their lineup to skate with Chicago, as we saw in Game 1.

Craig Custance: I agree with Corey. I know a lot of us picked the Blackhawks, but I did it in seven and didn't feel great about it. This is going to be a close series. The Predators are really good and a top-10 possession team. I picked the Blackhawks in seven and still expect this series to go the distance, and I ultimately sided with Chicago because of its experience. But it's no surprise that the Predators are making it interesting.

Pierre LeBrun: If it wasn't for the fact I picked the Blackhawks to win the Cup before the playoffs, I would have picked the Predators to win this series -- I absolutely hate picking against them. To Corey's point, this isn't a lopsided matchup; in fact, it's very close based on talent. The problem is that the Predators lacked consistency during the season, and it cost them the kind of seeding they should have had. I picked them in September to win the Central. This series pits two teams worthy of meeting in the Western Conference finals. It's no shock the Preds won Game 1 and no surprise this series will go long. I still have the Blackhawks winning it, though.

Predators blank Blackhawks
Viktor Arvidsson scores the only goal of the game in the first period, and Pekka Rinne makes 29 saves as Nashville tops Chicago 1-0.