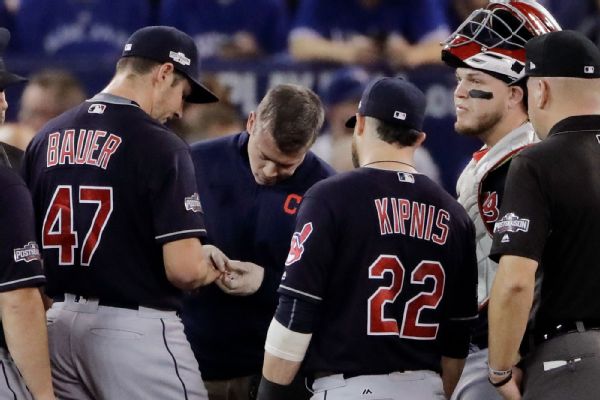 Four batters into the first inning of Game 3 of the American League Championship Series on Monday, blood began to drip out of Bauer's right pinkie finger, causing the Cleveland Indians pitcher to be forced from the game. But six Indians relievers combined to record 25 outs in a 4-2 victory over the Toronto Blue Jays.

Bauer gashed his finger while doing routine maintenance on a drone last week in Cleveland and had his scheduled start pushed back from Game 2. According to Bauer, his finger hadn't bled in the previous two days, leading the Indians to believe he would be able to pitch.

But Bauer said he felt blood trickling down his ring finger after the third pitch of an at-bat against Troy Tulowitzki, the fourth batter of the game.

"I looked down, it was bleeding pretty good," Bauer said after the game, in which the Indians took a 3-0 lead in the series. "I was like, you know, my only chance to stay in the game here is to get through the at-bat and get in the dugout and hope to stop the bleeding. Sometimes the circumstances aren't in your favor."

Bauer walked Tulowitzki, at which point Blue Jays manager John Gibbons signaled to plate umpire Brian Gorman. Rules forbid pitchers from using a foreign substance, including a bandage, on their hand. Sources told ESPN's Buster Olney that Bauer was indeed removed under the foreign-substance rule, and Gibbons said MLB discussed the situation with the teams ahead of time.

"The other night we had a pre-series meeting, they brought up the injury and MLB told both teams if he starts bleeding at all he's got to come out of the game," Gibbons said. "Regardless, you can't put anything on it to do all that, and we kept getting calls that he was bleeding pretty good."

Bauer was replaced by Dan Otero after 21 pitches.

The Indians knew this was a possibility. Before the game, manager Terry Francona outlined a scenario in which Bauer would have to leave the game early, forcing the bullpen into action. As a result, he decided to alter the rotation and start ace right-hander Corey Kluber on short rest in Game 4 on Tuesday.

Francona said Gibbons was almost apologetic for having to point out the injury to Gorman.

"Gibby actually called me. He goes, 'That's not really what we wanted to do,' but it was pretty ... I get it," Francona said. "I mean, shoot, it was only a matter of time until everybody saw it. It was bleeding pretty bad."

Francona, in a postgame interview with Olney, said he figured the Blue Jays' side had seen the extent of the bleeding on TV.

"When I went out there and got to the mound, I couldn't believe how much it was bleeding," Francona said. "I can't believe he hid it for the two pitches. I mean, it was on the dirt, it was on the rubber. And Brian Gorman looked at me and said, 'He can't pitch.' I was like, 'I know that.'"

Bauer didn't put up much of an argument about leaving the game, another signal that the decision was out of his hands.

"I'm sure if they had given him the option of chopping his finger off or coming out of the game, he would've chopped his finger off,"Indians closer Cody Allensaid.

Gorman had approached the mound as Francona made his visit.

"That's too much," Gorman could be heard saying in a TV replay, referring to the blood flow from Bauer's finger. "You're going to have to replace him."

As he walked off the field to a mock ovation from the raucous crowd at Rogers Centre, Bauer motioned to the crowd with his injured finger.

"That was the loudest standing ovation I've ever gotten after an outing," Bauer said. "I guess I enjoyed the class of them cheering since I was injured."

Francona, who also was Curt Schilling's manager with Boston during the famous bloody-sock game against the Yankees in the 2004 ALCS, already is juggling a rotation that is missing injured starters Carlos Carrasco (broken hand) and Danny Salazar (forearm strain). Right-hander Mike Clevinger had been slated to start Game 4, but given the uncertainty over Bauer, the Indians moved him to the bullpen as a long reliever and slotted Ryan Merritt into the rotation.

Indians president of baseball operations Chris Antonetti said the team thinks Bauer will be able to pitch again in the ALCS if it goes long enough and that Bauer should be ready by the World Series if the Indians are "fortunate enough to advance."

"He's real disappointed," Antonetti said. "I don't want to speak for him, but I think he feels like he let the team down in some respects. He was dead set on pitching deep into the game and giving us a chance to win. To have to leave it early and turn it over to the bullpen, he was frustrated.

"But in the end, he was elated that we won. That's been part of Trevor's maturation as a pitcher. He's been able to put all those other things aside and just focus on the team win. He was pretty happy at the end of the game."