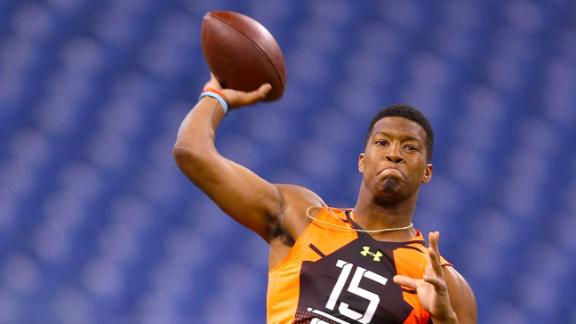 Jameis Winston and Marcus Mariota, who each promised to do the full workout at this year's NFL scouting combine, kept their word Saturday as both quarterbacks went through the paces at Lucas Oil Stadium.

In what will be a constant exercise in comparison shopping until the NFL draft April 30, the best quarterback prospects in this year's class proved they were well prepared for the big stage.

Throwing in the orchestrated drills of the combine to an unfamiliar group of wide receivers, with all dealing with the adrenaline of the moment, often can be a difficult thing for all involved.

But both Winston and Mariota each showed an easy throwing motion and deep-ball accuracy, and competed well in the drills.

Winston's work was given particular attention since concerns arose over some weakness in his throwing shoulder during the extensive medical exam players receive at the combine. In addition to the usual assessment by every team's medical staff that all players at the combine receive, Winston was also sent for an MRI on his shoulder.

Some scouts wondered Friday night whether Winston would still throw, given a player who had his throwing shoulder examined as extensively as he did would likely experience some soreness. But the 2013 Heisman Trophy winner threw as scheduled.

Winston said Friday that he was not concerned about the attention being paid to his shoulder.

"I had an MRI, just like everyone else," the former Florida State star said. "I've been playing football for, since I was 4 years old, and my shoulder has been fine."

Of the top quarterback prospects, only Colorado State's Garrett Grayson, who suffered a hamstring injury Feb. 10 in a pre-combine workout, did not participate in Saturday's workout.

Mariota showed top-tier athleticism, having run one of his 40-yard dashes in 4.52 seconds -- faster than 10 of the wide receivers who ran in their workouts Saturday -- to go with a 36-inch vertical jump and a 10 foot, 1-inch broad jump. He had the fastest 40-yard dash time among all 15 quarterbacks.

Winston Impresses At Combine
John Clayton discusses the top quarterback performances at this year's NFL scouting combine, including Jameis Winston, who showed off his arm and looked great.

Will Mariota's Athleticism Improve Draft Stock?
Tim Hasselbeck discusses Marcus Mariota's athleticism and speed, which was on display at the NFL scouting combine, and how that sets Mariota apart from Jameis Winston.