Jerry Colangelo: LeBron James has 2016 Olympic roster spot if he wants it 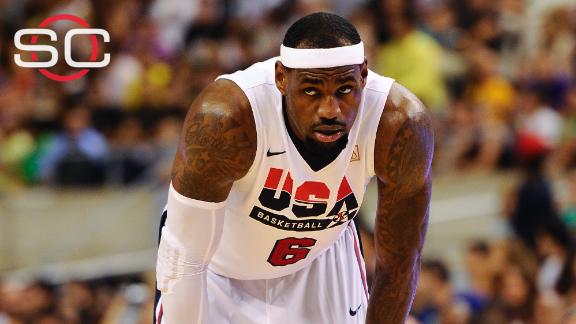 LAS VEGAS -- LeBron James knows he has a spot on the 2016 U.S. Olympic basketball team if he wants it, according to USA Basketball managing director Jerry Colangelo.

In an interview Tuesday with ESPN, Colangelo said he is comfortable with the widespread expectation that James is unlikely to make a firm decision about his participation in next summer's Olympics in Brazil until after the upcoming NBA season.

"He will be in town during the course of this week," Colangelo said. "He won't be participating in any practices to the best of my knowledge, but ... he knows he has a [roster] spot.

"If he wants to perform -- and I believe deep down inside he does -- then I would expect that he will be playing for us next summer."

James was not at a team meeting Monday night in advance of Tuesday's first on-court workout, but he will satisfy Colangelo's eligibility requirements for the 2016 Olympic squad as long as he makes an appearance in Las Vegas during USA Basketball's three-day minicamp on the campus of UNLV.

Colangelo has made attendance compulsory in Las Vegas this week for any player wishing to be considered for the 2016 Olympic team, but the two days of scheduled workouts Tuesday and Wednesday and Thursday night's intrasquad scrimmage will all be non-contact.

James is one of three players, along with Carmelo Anthony and David Robinson, to represent the United States in three different Olympic tournaments. Along with Anthony -- who, as ESPN first reported, plans to practice later Tuesday in his formal return from midseason knee surgery -- James thus has an opportunity be a record-setter if he chooses to play on the 12-man squad bound for Rio de Janeiro next August.