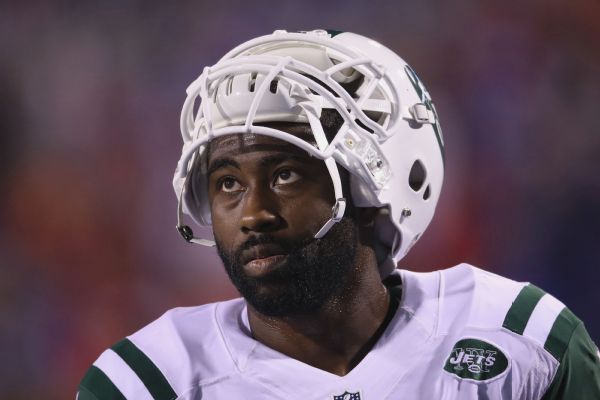 Moments after declaring Sunday's game against the Seattle Seahawks "a must-win for us," the Jets' star cornerback's mood turned snippy when asked about his Seattle counterpart.

Revis interrupted a reporter in mid-question when Sherman's name was mentioned in relation to their acrimonious history.

"We're not going there," Revis said.

"We're not going there," Revis said.

Again, the reporter attempted to finish the question.

"We're not going there," Revis snapped.

Finally, Revis was asked his opinion of Sherman as a player.

Things got nasty between Revis and Sherman in 2013, when Revis was regarded as the best corner in the NFL and Sherman apparently wanted to dethrone him.

Revis fired back: "I never seen a man before run his mouth so much like girl. This dude just steady putting my name in his mouth to get notoriety."

Sherman might have taunted Revis in Super Bowl XLIX on Feb. 1, 2015, gleefully holding up "24" with his fingers moments after Revis, who wears No. 24, was burned for a touchdown. At the time, Revis was playing for the New England Patriots. Sherman also could've been referring to the Seahawks' point total at the time, 24.

Revis got the last laugh, as the Patriots won the Super Bowl. Sunday will be their first meeting since then.

It's a huge game for the Jets (1-2), coming off an eight-turnover loss to the Kansas City Chiefs.

Revis called it a must-win because the Jets need "to regain the momentum back for the team, and for us moving forward. I think this Sunday, with a win, that would be a kick-starter for us, and start us up for the rest of the season."
Related topics:
sportsespnfeuddarrelle revisnew york jetsnflseattle seahawksrichard shermanrivalry
Copyright © 2020 ESPN Internet Ventures. All rights reserved.
More Videos
From CNN Newsource affiliates
TOP STORIES