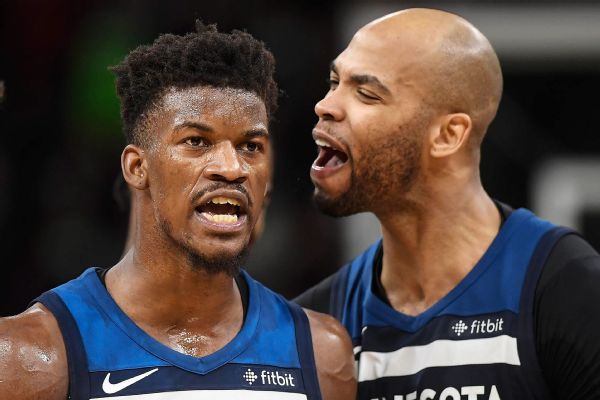 CHICAGO -- Jimmy Butler and Taj Gibson received several standing ovations in their return to the United Center on Friday night, but they couldn't pull out what they wanted the most against their old team -- a win.

The Chicago Bulls earned their most impressive victory of the season in an emotionally charged 114-113 win over former coach Tom Thibodeau and the Minnesota Timberwolves.

Butler acknowledged that he has a "lot of love and respect" for the city of Chicago and was appreciative of all the cheers he and Gibson got throughout the night.

"It's great to see the fan base come out and watch me and Taj play and compete like we were still in a Bulls uniform," Butler said. "Cheering for us, excited when we're out there on the floor. It's huge. This is where it all started. They remember us for that, and we love them right back for it."

Butler, along with the draft rights to Justin Patton, was traded to the Timberwolves on draft night in exchange for Zach LaVine, Kris Dunn and the draft rights to Lauri Markkanen. In a rich twist of irony, it was LaVine who ended up getting the last laugh over his former team, scoring 35 points -- 15 in the fourth quarter -- and hitting the three free throws that won the game after being fouled by Butler.

"It was big," LaVine said of the win. "[Butler] is an incredible big-time player. I take the challenge, and the team had the challenge as well. It was a little bit of a shootout, but we came out on top, but the emotions were there. The crowd was into it. I was into it. I think everybody on both sides were ready for this game for a long time."

What makes this win even more special for the Bulls is that it came after Thibodeau's new team built up a 17-point second-half lead. Before the game, Thibodeau tried to play off this contest as being just another game, but the emotion exhibited by both teams revealed otherwise. For a Bulls team that is expected to spend the rest of the season tanking to secure a high lottery spot, this game had to feel sweeter against a Timberwolves team filled with former Bulls that expects to make the playoffs.

"We're not good enough to think that the game is over five minutes into the third quarter," a frustrated Thibodeau said. "And when you do that, we messed around, played with fire, and we got burned."

After the game ended, both Butler and Gibson got a lot of hugs and handshakes in the tunnel on their way out of the United Center. Butler was particularly appreciative of the fact that Bulls executive vice president John Paxson popped his head into the Timberwolves' locker room after the game to say hello to both him and Gibson. While there are still some hard feelings between Butler and some members of the Bulls organization, Friday offered a kind of healing given how much support he received.

"You got to realize that it's a business," Butler said. "Not a lot of guys stay in one place forever. They were moving in a different direction."

"It was awesome," Gibson said of the reception. "It was awesome. I got a little teary-eyed a little bit. This place was wonderful for me. I became a man here. Just always going to think about positive thoughts [in Chicago]."

Gibson admitted that he started shaking a little bit in the huddle early in the game because of all the emotion.

"I was looking at parts of it, and I just started seeing all the memories," Gibson said. "All those games just start coming back to me, and I just put my head down because I was just thinking [of] all those good memories that I never wanted to let go."

As disappointed as Butler was about the loss, he knew Friday was a special night that both he and Gibson won't soon forget. He also caught a glimpse of the nice video tribute from the Bulls, noting that a lot of things changed over the years.