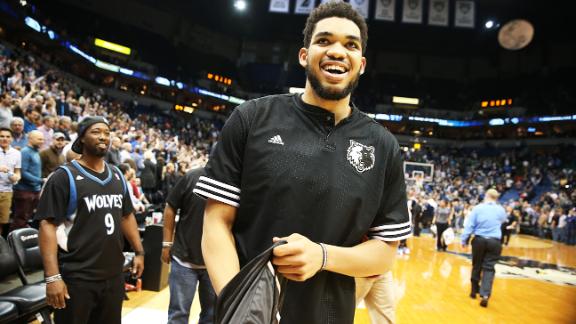 Minnesota Timberwolves center Karl-Anthony Townsis the unanimous choice as NBA Rookie of the Year, it was made official Monday.

Towns, the No. 1 overall pick from Kentucky, received all 130 votes, which were cast by sportswriters and broadcasters in the United States and Canada. He became the fifth unanimous choice since Ralph Sampson won it in after the 1983-84 season; the other unanimous picks wereDamian Lillard (2012-13), Blake Griffin (2010-11) and David Robinson (1989-90).

It also gave the Wolves back-to-back honorees after forward Andrew Wiggins won the Eddie Gottlieb Trophy last season.The Minnesota became the first team with back-to-back winners of the award since Bob McAdoo and Ernie DiGregorio with the Buffalo Braves in 1973 and 1974.

Kia Motors America donated a new Sorento CUV to the Minnesota Chapter of the Leukemia and Lymphoma Society on Towns' behalf. Towns said the donation was made to honor the late Flip Saunders, who was the Timberwolves' coach when Towns was drafted. Saunders diedof cancer at age 60 last October.

"When I got the news I'd won the award and I was getting a Kia, I think the biggest thing I could only think about was Debbie [Saunders] and Flip," Towns said. "They're like my family. They're like a second family to me. ... I knew right away I wanted to do something special for Flip."

Towns posted the best rookie season by a big man since Tim Duncan. He averaged 18.3 points, 10.5 rebounds and 1.7 blocks and helped the Timberwolves win 13 more games than they did the previous season. Towns played all 82 games and was named Western Conference rookie of the month in all six months the award was handed out.

"This is not something you win by yourself," Towns said. "This is a team award. This is something done by everyone coming together."

From the night of the NBA draft all the way to the end of his first season, Towns stood head and shoulders above the rest of his rookie class.

Towns turned 20 early in the season but showed the polish and poise of a veteran. His ability to pass, rebound, block shots and score from the paint and the 3-point line makes him the quintessential big man for the modern era and gives the Timberwolves hope that they have finally found the star players needed to carry them out of the abyss.

"When you're a rookie, I think, the biggest thing is the pressure. There's a lot of pressure," Towns said. "And I had additional pressure from being the No. 1 pick. I'm just so blessed, I can't say enough. I thank the man upstairs every single day. I have such a great family."

In addition to Towns and Wiggins, the Timberwolves have a promising supporting cast withZach LaVine, Ricky Rubio, Gorgui Dieng and Shabazz Muhammad that will be coached next season by Tom Thibodeau, and the Wolves believe they have the ingredients to finally end a 12-season playoff drought.

"This is a great time for Minnesota, not just for the draft but because of the direction we're going," Towns said. "This is a great direction. We're going upward. We're a team on the rise. I see special things for us, not years from now, but next year.

"We made some great moves. The team is on the right path. We're doing a great job every single day, minute, second of improving our team to be the team we want to be. I see nothing but aspirations to be in the playoffs next year and trying to make a run."

It didn't take Towns very long to make an impact. He had 28 points and 14 rebounds in the second game of the season, a victory over Denver, and though many rookies hit a wall in the middle of the long, grueling NBA regular season, Towns got better as the season went on. He averaged 21.3 points on 55 percent shooting and 11.7 rebounds in the final 31 games of the season.

"He's going to be a Hall of Famer in this league," Oklahoma City star Kevin Durant said.

Towns routinely greeted questions about his success with a shrug. The Timberwolves still won only 29 games and finished far out of the playoff picture in the Western Conference.

"He's about winning," Towns' father, Karl, said. "He's not about no accolades. Karl doesn't take losing. He's never going to settle. That's the drive in him. That's what drives Karl. He has goals that he's set, and he's not going to be happy until he achieves them."

Towns: 'We're going to be a playoff team next year'
The Timberwolves' Karl-Anthony Towns shares what it means to him to be the unanimous choice for NBA Rookie of the Year and what hopes he has for the Wolves next year.

Daugherty: Towns will be an all-time great
Brad Daugherty explains why he loves Karl-Anthony Towns' game and says the Rookie of the Year will be a perennial All-Star and will take the Timberwolves to new heights.