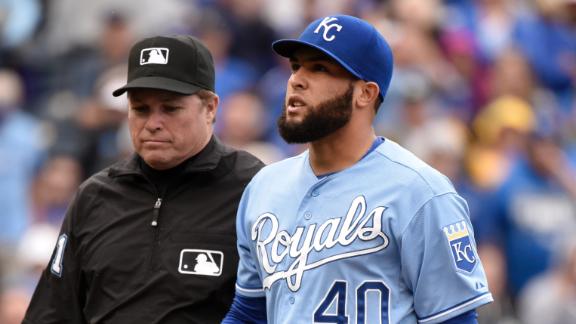 
Herrera was tossed in the eighth inning of Sunday's game after throwing behind Lawrie, the second time he had thrown inside to him. Ventura was ejected on Saturday when he hit Lawrie with a 99 mph fastball above the left elbow immediately afterJosh Reddick's home run.

Herrera was to start his suspension Tuesday night against Minnesota, however he is appealing the punishment, according to multiple reports.


"Nobody likes going through what we went through this weekend, nobody," Royals manager Ned Yost said. "Nobody likes it, but it happens."


The incidents came after Lawrie's hard, late slide into Alcides Escobar covering second base Friday night left the Kansas City shortstop with a sprained left knee. Escobar and several of his teammates called it a "dirty slide" and unnecessary given the situation.


Lawrie said he texted an apology to a phone number for Escobar he got from Royals first baseman Eric Hosmer. Escobar denied receiving the text.


The incident on Friday night triggered both benches and bullpens to empty, though no punches were thrown. And it led to a tense series between teams that met in last year's AL wild-card game, which the Royals won in come-from-behind fashion in 12 innings.


The benches cleared again Saturday after Ventura's pitch, and for a third time Sunday, when the teams began playing a dangerous game of dodgeball involving 90-plus heat.


The Athletics' Scott Kazmir started things off by hitting Lorenzo Cain. Both teams were issued warnings by plate umpire Greg Gibson, and Yost came out to argue. He was immediately tossed from the game along with pitching coach Dave Eiland.


Things settled down until the eighth, when Herrera threw inside to Lawrie. Moments later, he sent a 100 mph fastball behind Lawrie's shoulders and was quickly ejected. Bench coach Don Wakamatsu and Escobar, who had been in the dugout, also were tossed.


"I don't mean to hurt anybody," Herrera said. "Just trying to throw inside, but a bad grip on that fastball. It started raining pretty good. And they just tossed me out."


Herrera did point to his head as he left -- what he called a "think about it" warning.


The Royals were already on edge when the series began after a number of their players had been hit by pitches earlier this season. Among them was outfielder Alex Rios, who landed on the disabled list with a broken finger after getting hit by Twins rookie J.R. Graham.


"At first I thought it was more of a fluke. Now I'm starting to think the other way a little bit," Yost said. "Hopefully it'll slow down a little here."