Kids, comebacks and unlikely heroes among the playoff surprises so far 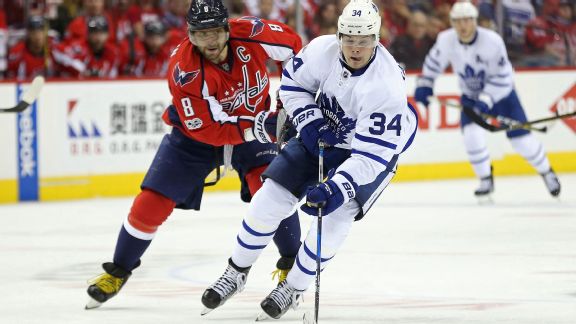 ESPN
By Scott Burnside
If I hadn't seen it with my own eyes, I might not believe some of what has unfolded during the first week of the Stanley Cup playoffs. As John Lennon once sang, these are strange days indeed. So, in case you didn't see them, here are some of the biggest surprises so far:

The kids are more than all right

FormerToronto Maple LeafsGM Cliff Fletcher once famously opined "draft, schmaft" as he dismissed the value of his team's picks. Well, how about "experience, schmexperience"? Toronto and theWashington Capitals have gone to overtime three times in the first week. But instead of folding because they lack that all-important experience, the young Leafs have surged ahead of the two-time defending Presidents' Trophy winners thanks to 20-year-old Kasperi Kapanen's goal in double overtime in Game 2 and a big performance by 19-year-old Auston Matthews in Game 3, who collected his first points of the playoffs on a goal and an assist and set upTyler Bozak's power-play winner in Game 3. Even more impressive: A Leafs team that could not hold leads during the regular season overcame a 3-1 deficit in Game 3 and a 3-2 deficit in Game 2.

Kids are making a mark for other playoff teams, too.Shea Theodore, 21, has five points while filling in on an injury-depletedAnaheim Ducksblue line. Minor league call-up Jake Guentzel, 22, has become the first player since Maurice "Rocket" Richard in 1944 to score five goals in his first four playoff games, including an overtime winner in Game 3 that helpedthe Pittsburgh Penguins take a commanding series lead against the Columbus Blue Jackets.St. Louis Bluesdefenseman Joel Edmundson, 23 -- who had four goals in 136 regular-season games -- has now scored twice in three games to pace the 3-0 Blues. Youth is definitely being served.

Unlikely heroes save the day

Speaking of young guns,Connor McDavid has been as good as advertised, but the Edmonton Oilers wouldn't be tied with theSan Jose Sharksin their opening-round series without the contributions of Zack Kassian,who had the game winners in both Oilers victories. Kassian has battled substance abuse and other off-ice issues but has emerged as an unlikely postseason hero and kept his NHL dream alive. The Oilers gave him a chance, and the 26-year-old forward has made the most of it thus far.

Kassian is one of a handful of players looking to redefine themselves this spring. Capitals tough guy Tom Wilson got the overtime winner for Washington in Game 1 and has been an effective force. The last time Alexander Radulov was in the playoffs, the winger was benched by then-Nashville coach Barry Trotz for busting curfew in Arizona. Now Radulov is an inspirational leader for Montreal who has paced the Habs with six points -- including an overtime winner.

Try to get your head around this.The Minnesota Wildand Chicago Blackhawkscombined for 215 regular-season points. They ranked second and ninth, respectively, in goals scored per game. As of Wednesday morning, they are 0-6 in the playoffs and have scored five goals in those six games. They represent two of the three teams -- along with theCalgary Flames-- still facing the shame of being swept out of the first round of the playoffs. (The Blue Jackets avoided the same fate by holding off the Penguins on Tuesday night.)

Last year, no teams were swept in the postseason, and only two teams went winless in all of the 2015 playoffs. Since 1987, when the best-of-seven series were introduced for every round, just seven teams with at least 100 points in the regular season have been swept in the first round -- and only one in the past decade. The Tampa Bay Lightning were swept by the Montreal Canadiens in 2014.In short, some good teams are trying to avoid making some ugly history the next two days.

What gives with all the comebacks? According to Elias Sports Bureau, 11 times already this spring the winning team has rallied from behind, and seven of those comebacks have been from multigoal deficits -- including all four games on Monday night. Part of this is because officials have shown that they're not afraid to call penalties from beginning to end (as they should be), as we saw with late-game penalties in both Toronto and Boston on Monday that each set up power-play winners in OT. And part of it is simply the overwhelming pace of the game today. The playoffs have historically been a time when teams nurse leads and dumb down the game. That hasn't been the case so far this postseason, and here's hoping it doesn't end any time soon. The first-round record for comebacks, 17, was set in 2013 and definitely remains in sight.

Finally it seems that each postseason a goaltender steps up and simply defies opponents to score and sets the tone for his team. Sometimes you call that the playoff MVP. If you had to pick one goalie to do that this spring, you probably wouldn't have started withJake Allen. But Allenhas stopped 114 of 117 shots thus far to catapult theSt. Louis Bluesto a 3-0 series lead over the Wild. The 26-year-old has struggled in the postseason in the past, but he has seized the moment so far this spring.

LikewiseNashville PredatorsgoaliePekka Rinne has struggled with consistency at times the past couple of seasons but has allowed just two goals on 95 shots to lead his team to a shocking 3-0 series lead over Chicago. At the other end of the "huh?" spectrum is Vezina Trophy favorite Sergei Bobrovsky, who has gone sideways with an .891 save percentage for 1-3 Columbus while Brian Elliott, the key to Calgary's run to the playoffs, is struggling with a league-worst .887 save percentage for the winless Flames.