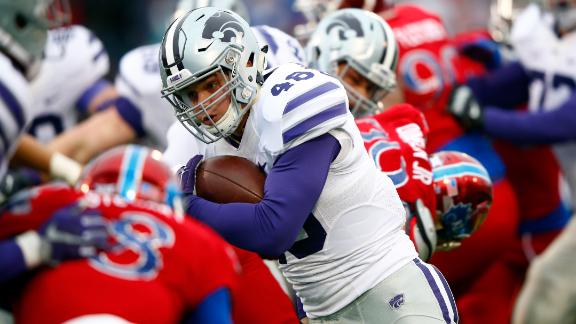 MOBILE, Ala. -- The New England Patriots had a tremendous find six years ago when they drafted perennial Pro Bowl tight end Rob Gronkowski.

Could the Patriots be on track to add another Gronkowski in the 2016 NFL draft?

Kansas StatefullbackGlenn Gronkowskisaid at the Senior Bowl that he was scheduled to meet with the Patriots on Wednesday night. The interest makes sense; he is the younger brother of Rob, New England's dominant tight end.

Can the Patriots handle two "Gronks" on the same team? According to Glenn Gronkowski, 22, New England would be an ideal landing spot.

"That would be awesome," he said. "I've actually never played with any of my brothers before. They've always been too old for me. ... Everyone else has played together, so to be on the same team, that would be a dream come true."

It wouldn't be a first for the Patriots. In 2011, brother Dan Gronkowski, a tight end, was on the roster and played in five games, including one start.

The Patriots value versatility, and Glenn Gronkowski is being asked to play out of position at tight end this week at the Senior Bowl. A 6-foot-3, 234-pounder, he played fullback his entire career at Kansas State but believes proving he also can play tight end will add value with NFL teams.

Glenn Gronkowski didn't get the ball much last season for Kansas State, with just 11 carries for 45 yards and five receptions for 76 yards. This week he has been more involved in the passing game and showing the good hands that run in his family.

Although Rob Gronkowski casts a large shadow, being the younger sibling isn't something that Glenn Gronkowski is shying away from.

While ESPN draft analyst Mel Kiper rated Glenn Gronkowski as the No. 2 fullback in this year's draft, he is unlikely to go before the late rounds.