Kyle Hendricks searching for answers when Cubs need him to deliver 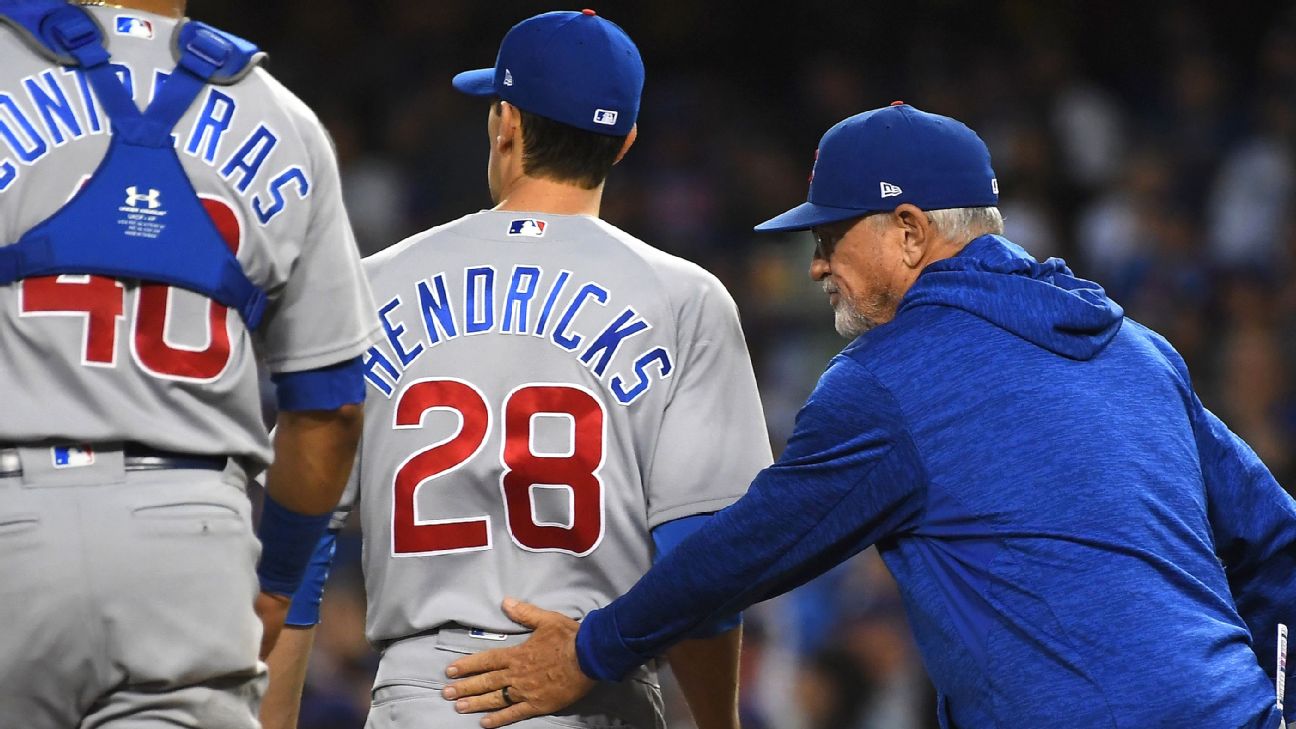 LOS ANGELES -- Frustrated. Perhaps even exasperated. Pick a similar adjective and it would probably fit the description of Chicago Cubs right-handerKyle Hendricks' mood right now. After the second-shortest outing of his career Wednesday night, the former ERA champion is searching for answers.

Hendricks might feel good, but he looked anything but as he answered questions at his locker after giving up six runs in 2 innings, serving the Dodgers two home run balls as his first-inning ERA ballooned to 7.88. He was asked if his pregame preparation should be scrutinized, considering those early-game struggles.

"You're always looking at your routine," he said. "Today my bullpen was OK. Felt strong. The mechanical things I've been working on felt OK. I get out there and I'm all over the place."

Staked to a 2-0 lead, Hendricks gave up a home run to Max Muncy on his 10th pitch of the game, a two-seam fastball. Later in the first, Yasmani Grandal doubled home two runs on a four-seamer.

Usually, Hendricks settles down after the first inning, but that wasn't the case Wednesday. His troubles continued in the second when he gave up a home run to Joc Pederson on another four-seam fastball, then walked Muncy on four pitches. Things kept getting worse, but why? Why is the man who had a 2.13 ERA in 2016 and a 3.03 mark last season struggling so much? If he knew, he'd fix it.

"It's just bad," Hendricks said. "Something is just off."

The Cubs can't afford anymore issues in their rotation. Already, there is uncertainty with Yu Darvish and Tyler Chatwood, two free agents who have underachieved so far. Jose Quintana is no model of consistency either, but the Cubs have almost always been able to count on Hendricks. That's not the case right now. Hendricks has given up 16 home runs, only one fewer than his career high for a season.

"Falling behind guys, not hitting any spots," he said. "Fastball command is bad. Just got to find something."

We might not know why it's happening, but we can look at how it's happening. According to ESPN Stats & Information, opponents have a whopping .533 batting average in at-bats that end on a Hendricks curveball. That's up from .250 in his masterful 2016 season. And hitters aren't chasing his change-up as much, down from a 52 percent chase percentage to 38. They're also looking at that pitch more, swinging at the change-up 56 percent of the time compared to 64 percent in 2016. It has allowed hitters to sit on his two- and four-seam fastball, especially when he has little confidence in his curve.

"It's coming out fine," Hendricks said. "Just not locating at all. We're going to have to keep searching until we find it."

His woes mirror the ones the team is having on a dreadful road trip. With one game left, the Cubs have lost six of seven to Cincinnati and Los Angeles. Somehow, they haven't fallen too far behind in the division race, but with Clayton Kershaw the opposition Thursday afternoon, they could be staring at a disaster of a trip. Poor starts -- other than Jon Lester's on Tuesday -- have forced relievers into action.

"The way the bullpen is you can't have that outing," Hendricks said.

Hendricks answered questions as best he could, though with a pained look on his face. He has no real answers to his troubles, so it's back to the drawing board for a pitcher the Cubs desperately need, now more than ever.

"I've had troubles in my career, but this is up there with one of my toughest," Hendricks said. "Challenge is just an opportunity. I have to take advantage of it, work hard and get through it."