Kyle Schwarber could be Cubs' X factor this postseason 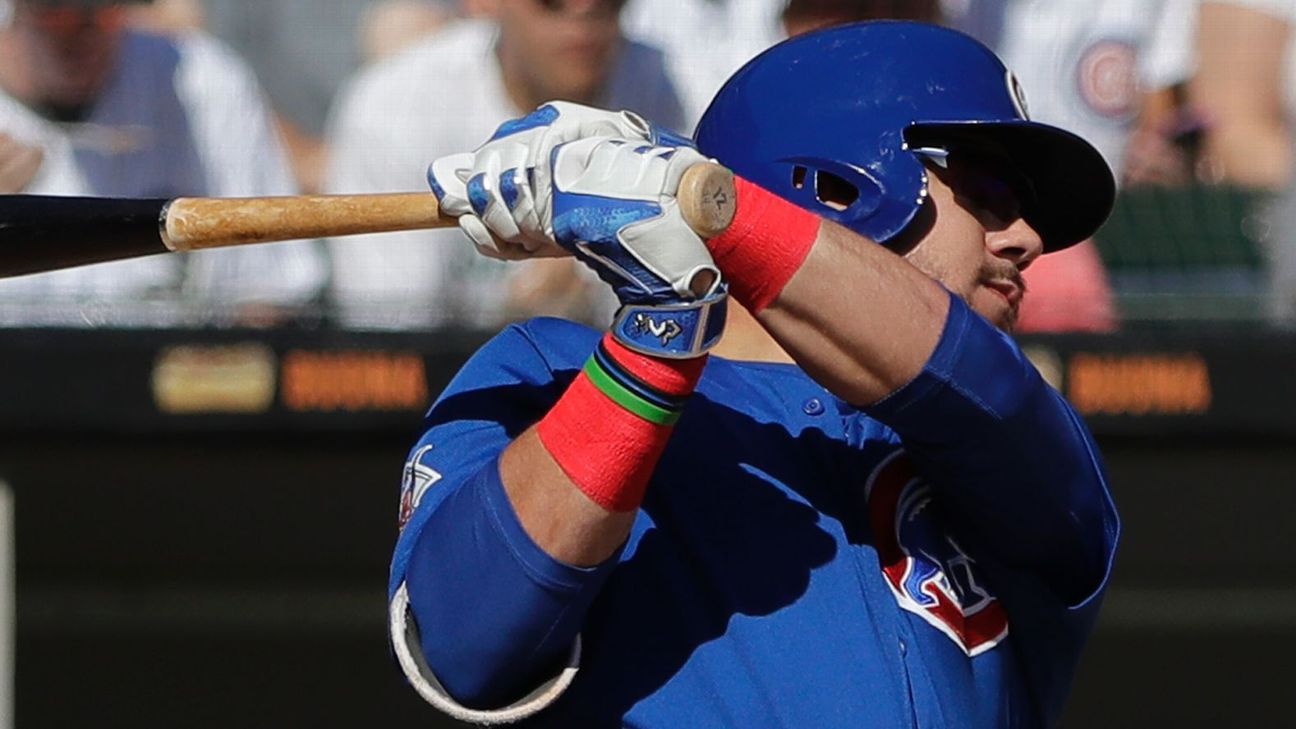 ESPN
By Jesse Rogers
CHICAGO -- Talk about giving your manager something to think about for October: Chicago Cubs lefty slugger Kyle Schwarber hit his first home run off a left-hander this season on Sunday, after hitting 25 against righties in 409 previous at-bats.

Schwarber wasn't supposed to play Sunday, but Kris Bryant got the day off due to a fatigued shoulder, allowing Schwarber to mash against White Sox lefty Carlos Rodon. Coming into the game, Schwarber was hitting .208 against lefties with just two extra-base hits. By the third inning, he had doubled that season total, as he followed his second-inning 444-foot shot with a double off Rodon, helping the Cubs to a 6-1 win.

"It's not a big deal," Schwarber said after the game. "I'll take a homer and a double if it's off a side-arm right-hander or switch-handed pitcher."

Having said that, there's little doubt that Schwarber wants to play against all types come next month. He has been mostly a platoon player in his career, though he hit everyone during the playoff run in 2015 as well as in his famous World Series appearance in 2016. Since then, it has been a long road back to stardom.

Schwarber had an awful 2017 campaign, eventually finding his way to the minors, but after committing himself to losing weight and becoming more agile, he has returned with a vengeance. However, it has been an under-the-radar season for him in a lot of ways. He can blame a teammate for that.

"Javy [Baez] doing what he does has taken a lot of the attention away," said Kyle Hendricks, Sunday's winning pitcher. "But that's a good thing. It helps a lot of us around here. A lot of guys feast on being under the radar. I think Schwarbs is one of those guys."

After Sunday, even die-hard Cubs fans would probably be surprised to learn that Schwarber moved ahead of Anthony Rizzo and Ben Zobrist for second on the team in OPS. He now ranks 17th (.845) in the National League, behind only Baez on the Cubs.

"Last year was a little different, but he put in the work this offseason," Bryant said. "Got his body right, his mind right. It's nice to see someone turn it around and feel good about that. I'm super happy for him."

Hendricks agreed. "He's had a helluva year, especially bouncing back from what he's gone through," he said.

Could Schwarber start to get noticed come October? After all, he is already a fall folk hero in Chicago due to a whopping 1.031 postseason OPS. If that continues after the Cubs (likely) clinch the NL Central this week, Schwarber no longer will be in Baez's shadow.

"He steps up in big moments," Hendricks said. "He's one of those guys that doesn't let the moment get bigger than it is. ... When the stage gets bigger, he's really good at simplifying things and focusing on the task. In October, it's tough for guys to do that. He does that really well."

There's some irony to the run Schwarber is on. He hurt his back recently, which has forced him to use his hands even more at the plate. The result has been a better swing, according to manager Joe Maddon.

"It was not fluke-ish," Maddon said of Schwarber's Sunday home run. "In a perverse way, this injury could be helping him."

Schwarber shrugged off that suggestion but admitted that his timing is pretty good right now. He was 4-for-5 with three walks the past two days, both Cubs wins. This came after about a week off to rest his back. After a slow night Friday, Schwarber joked that he was sure his timing would return Saturday. It did -- and carried over to the next day as well.

"I told you I wasn't lying," Schwarber said with a smile. "I was praying, but I wasn't lying. ... Just have to keep that good feeling in these last couple games and the postseason."

The Cubs can clinch the division by midweek, at which point Maddon will start thinking about playoff lineups. On a deep team, Schwarber has secured his spot in left field against righties. But will he stay there when the Cubs face a lefty?

"That's his decision," Schwarber said of Maddon. "Whenever my name is in the lineup, I'm going out there and trying to do a job."

You wouldn't expect Schwarber to say anything else, as he has been the consummate pro, no matter the circumstances. At the very least, he has given his manager something to think about. Either way, the Cubs' Mr. October -- he's tied for the franchise lead in career postseason home runs (six) -- is revving up for another headline-grabbing month, assuming MVP candidate Baez gives him a chance.

Maddon was asked what having a hot Schwarber means to the lineup.

"That presents differently," he said. "Best way I can describe it. It makes the lineup longer. It gives the other side more to think about."

As for stepping up his game at this time of year, Schwarber is ready to do his part.

"It's always a fun part of the year," he said. "It's a brand-new season after the regular season is over. It's all about winning. That's what I love about it."