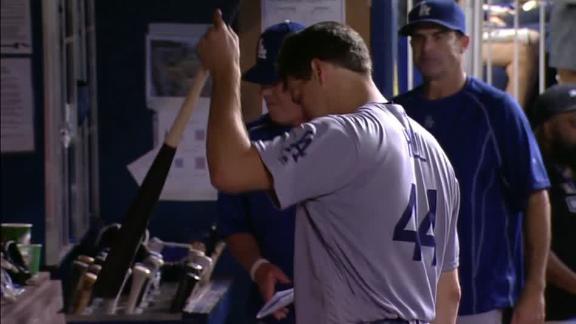 MIAMI -- Rich Hill's shot at personal history was cut short Saturday night so that the Los Angeles Dodgers could get a better focus on the team journey.

Carrying a perfect game through seven innings, Hill was removed after 89 pitches against the Miami Marlins, and the bullpen was pressed into duty. With a combined perfect game four outs away, Jeff Francoeur singled to left field off the tip of shortstop Corey Seager's glove with reliever Joe Blanton on the mound.

Three Dodgers relievers were ultimately called upon to finish off the 5-0 Dodgers' victory over the Marlins, who ended the night with two hits.

Hill was in just his third start with the Dodgers after being acquired from the Oakland Athletics in an Aug. 1 trade. His Dodgers debut was delayed multiple times as he recovered from a blister on the middle finger of his left hand.

So with Hill at 89 pitches, matching the most he had in a start with the Dodgers (in his only other start he threw 81), rookie manager Dave Roberts made the move that likely will be scrutinized for some time.

"I feel sick to my stomach," Roberts said immediately after the game. "Rich obviously had a perfect game and an opportunity of a lifetime. Just to take the personal side and understand there's a great opportunity for him and his family, his teammates. But as a manager, you're taking a lot of different information as far as we've been dealing with Rich's blister. That's cost him a lot of time this season."

The Dodgers view Hill as a key component to their rotation down the stretch and potentially in the playoffs. They also have Clayton Kershaw, who returned from the disabled list Friday, and 28-year-old rookie Kenta Maeda, who has impressed in his first season in the majors after playing eight years in Japan.

Roberts and Hill appeared to discuss the situation after the seventh inning, but they did not seem to come to a conclusion as the Dodgers batted in the eighth. Then with the bottom of the eighth about to begin, Roberts appeared to inform Hill that he was out of the game.

Hill appeared upset over the decision, but afterward he said he understood the reasoning behind it.

"I get it," Hill said. "Obviously I didn't want to come out of the game, right? But there is a bigger picture here, and I think we all know what it is. It's something for Dave that he is in a very difficult position. You look at it and you move on. That's all you can do. We're in the middle of this race right now and you just continue to move forward. That's the best way to do it."

The Dodgers remain four games in front of the San Francisco Giants in the National League West, but the mood in Roberts' office was anything but victorious.

"Yes, it does feel like a loss," he said. "I think every win is great, but this is probably the worst I've felt after one."

Hill mentioned "moving forward" more than a half-dozen times during his postgame chat with reporters. He said he is focused on his next start at Arizona next weekend.

Roberts, meanwhile, said his focus was on a price a little bigger in scope and a little further into the future.

"It's the toughest thing I've had to do," Roberts said. "But I know that it was for the reason to give us the best chance to win a World Series. Without Rich -- if something would have happened and [the blister] would have come up again, that opportunity would have been lessened. I feel for Rich."

Roberts suggested that a different issue on Hill's index finger was starting to cause problems, but Hill seemed to dispute.

"No, I didn't notice [a hot spot on the finger]. I just think that, like I said, there are some things that I totally understand where the front office is coming from and their concern," Hill said. "But I'm looking at it from the team aspect. That is something that is bigger than any player. So looking at it from that perspective, you have to understand what that concept is. But the finger is fine. You move forward and continue to look forward to the next outing against Arizona."

According to Elias Sports Bureau research, it was the longest perfect-game bid in the modern era (since 1900) by a pitcher who was removed from the game.

It also was not the first time Roberts has interrupted potential history this season.

"You know what -- situations come up and you've got to deal with them the best way," Roberts said. "I'm in my infancy, but this is the best job I could ever imagine. You have to make tough decisions. I just can't say how bad I feel for Richie and his family. After we're holding that trophy up, it'll feel a lot better."

Rich Hill pulled with perfect game intact
Rich Hill is taken out of the game after throwing seven perfect innings and striking out nine Marlins batters. The perfect game attempt is broken up in the bottom of the eighth inning.