Manny Pacquiao, back in Philippines, focuses on recovery 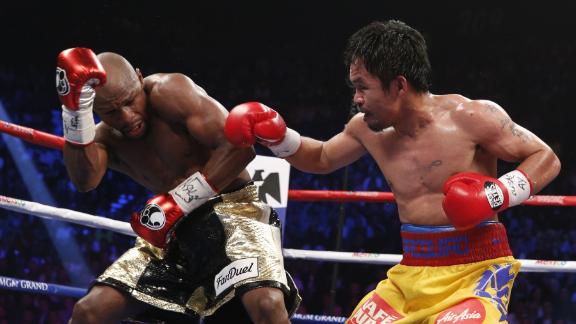 Manny Pacquiao repeatedly brushed off questions about the idea of a rematch with Floyd Mayweather on Wednesday, preferring to keep his focus on recovering from surgery on his injured right shoulder following his loss to the pound-for-pound king in boxing's richest fight ever.

Speaking to reporters after returning to his native Philippines on Wednesday morning, Pacquiao, wearing a black shoulder brace and arm sling, made it clear his only focus is to start rehab after having surgery to repair "a significant tear" in his rotator cuff.

"For now I don't talk about it, about my next fight," CNN quoted him as saying. "My focus is to recover and be OK."

Pacquiao and his family arrived early Wednesday and rested briefly in his mansion in the Forbes Park residential enclave of Manila. He later joined fans, supporters and politicians for breakfast at a nearby hotel before a motorcade around the Philippine capital.

Thousands lined the streets as his motorcade passed, waving, applauding and taking pictures of the 36-year-old champion.

"I know what you are thinking, that hopefully there would be a rematch. I like that. I want that," Pacquiao told the hotel crowd. "But for the moment, I am thinking of focusing on this shoulder, on my work and my family."

Pacquiao spokesman Fred Sternburg quoted orthopedic surgeon Dr. Neal ElAttrache as saying he could not be "more pleased with the results" and fully expects Pacquiao to make a full recovery.

Pacquiao echoed that sentiment Wednesday, saying "the doctor said I will recover 100 percent."

The surgery came four days after Pacquiao fought Mayweather at the MGM Grand hotel in Las Vegas, dropping a unanimous 12-round decision. Pacquiao asked for a pain-killing shot before the fight for his shoulder, but it was denied by Nevada boxing officials because they weren't aware previously of the injury.

Pacquiao said he thought he could fight after suffering an injury to the shoulder three weeks ago in training. He said he hurt it worse in the fourth round, when he landed some of his best punches of the night.

In an interview with Philippine broadcaster ABS-CBN, Pacquiao said he reviewed a video of the fight several times and believed he won, though narrowly, against Mayweather.

"I reviewed it repeatedly. I scored myself. I was ahead two points," he said.

He said, however, he respected the judges' decision.

"Enjoy your victory, you deserve it," he said in a message to Mayweather.

Nevada boxing officials are considering disciplinary action against Pacquiao for not disclosing the injury on a form the day before the fight.