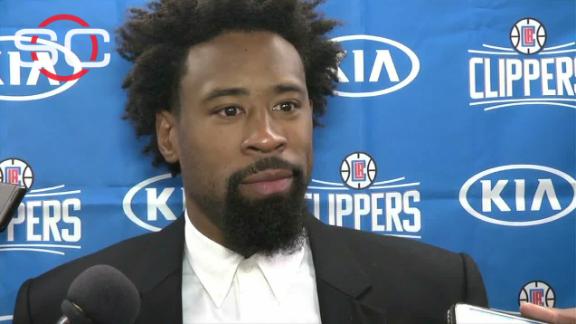 DALLAS -- Los Angeles Clippers center DeAndre Jordan and the Dallas Mavericks agree on one thing: It's time to stop harping on his July decision to renege on his commitment to come to Dallas.

OK, maybe the Mavs wanted to get in a couple more verbal jabs after Jordan's first appearance at the American Airlines Center since their free-agency courtship crashed.

The sellout crowd booed Jordan from pregame warm-ups to the final buzzer -- "I thought it was going to be a lot worse, honestly," he said -- during Dallas' 118-108 win over the Clippers. Jordan finished the game with nine points on 3-of-5 shooting and 11 rebounds in 27 minutes, during which the Clippers were outscored by 23 points.

"He's not a priority to us," Mavs small forward Chandler Parsons told ESPN.com when asked whether the Jordan drama was done. "And by the looks of their team, he's not to them, either."

That was a thinly veiled shot at Jordan's role with the Clippers, who promised during the recruiting process that he would be more of a focal point in the offense. With Parsons serving as their lead recruiter, the Mavs had sold Jordan on coming to Dallas to be a franchise player instead of a complementary piece with the Clippers.

Jordan had no interest in revisiting the summer saga.

"OK, I'm tired of answering the same questions," Jordan said. "I talked about this three months ago. Ultimately, I made a decision that was for me. And hopefully over time people will understand that. If not, talk to Mark [Cuban] about it."

Cuban, with whom Jordan has not communicated since the night before he re-signed with the Clippers, attempted to downplay the drama before the game while still taking some verbal shots.

"It's not like DeAndre and I pinkie-swore," said Cuban, who was giddy when Jordan originally accepted his offer of a max contract worth more than $80 million over four years. "It's not like we've been friends forever. It's not like he broke some trust we had. You know, he turned out to be who we thought he was."

Cuban continued to reference text messages that he kept from his July conversations with Jordan, saying he would release them publicly "if there's ever a good reason." To that, Jordan joked that he doesn't care "as long as it's not naked pictures of me."

Cuban said, however, that his recent jabs at Jordan and the Clippers were mostly in good fun.

"I have fun playing with this," Cuban said. "You guys know me. I have fun messing with it, without any question. But it's not that I'm mad or pissed off or bitter. Excuse my French, but if you f--- with me, I like to f--- with you back. It's just my nature."

Perhaps echoing Cuban's sentiment, the Mavs' official Twitter account couldn't resist taking a swipe at the Clippers after the game.

Clippers coach Doc Rivers continued to essentially roll his eyes at the drama, reiterating his belief that Jordan "had the right to get it right." Rivers said he was "shocked" that this was still a subject of so much discussion more than four months later, which is similar to thoughts expressed by Dallas star Dirk Nowitzki the previous night.

"If this was our kids, we would tell our kids, 'Please get over this,'" Rivers said.

Dallas coach Rick Carlisle uncharacteristically took a transparent swipe at Jordan after the game, during which the Mavs went ahead for good on a pair of clutch free throws by starting center Zaza Pachulia, whom Dallas traded for after being jilted by Jordan.

"Our guy is a 90 percent free throw shooter," Carlisle said, pausing for several seconds for comedic effect. "And we love him, because his basketball IQ, his basketball purity is as pure as undriven snow. He's a veteran guy that wants to be part of something bigger than himself, and he loves winning."

Pachulia, who had 10 points, 10 rebounds, three assists and two blocks in the win, wants no part of the Jordan discussion.

"I don't think it's the right thing to keep talking about DeAndre and how he didn't come. Hey, I'm here. Let's just worry about our team."

Unfriendly trip to Dallas for Jordan
DeAndre Jordan reactsto the Clippers' game in Dallas saying, "I thought the experience would be much worse."

Van Gundy calls out Dallas fans
During the Clippers-Mavs broadcast, ESPN's Jeff Van Gundy says of Dallas fans: "They're booing DeAndre Jordan tonight, and they'll be cheering someone like Greg Hardy on Sunday." 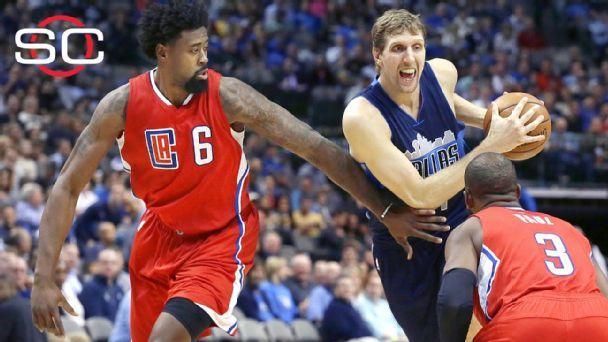