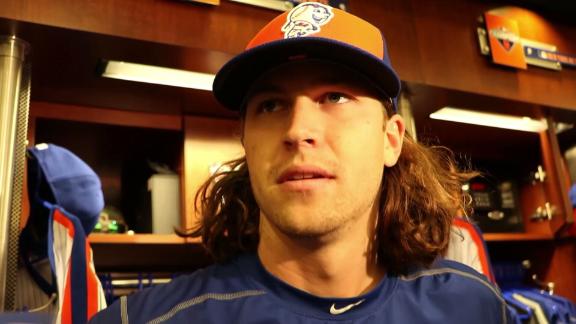 The issue lingered Sunday, two days after deGrom departed an outing after six innings because of the issue. The Mets decided it was not prudent for deGrom to throw his between-starts bullpen session and scratched him from Wednesday's start.

"It's improved, but not enough," manager Terry Collins said.

Said deGrom: "I would say it's quite a bit better today. I think we're going to err on the side of caution, though, this early in the season."

Collins said he did not believe deGrom's lat tightness would immediately result in a trip to the disabled list but added that he still needed to confer with the front office.

DeGrom expects to miss only one start and has no plans to undergo an MRI.

"We're pretty happy with how it's improving already," he said.

He recalled teammate Steven Matz pitching through a lat issue last season and ultimately landing on the disabled list for two months.

"Seeing what he went through ... I think at this time it's smart not to try to push it," deGrom said.

Right-hander Logan Verrett will fill in for deGrom on Wednesday against the Marlins at Citi Field.

"Anytime you've got five starters as good as we do, you might have to step in every now and then and fill their shoes," said Verrett, who last pitched in an April 1 exhibition game. "When Wednesday comes, I'll be ready to go and try to put up some zeroes and give us a chance to win."

Verrett beat out left-hander Sean Gilmartin for a long-relief/spot-starter role with the Mets out of camp. In his first major league start last season, Verrett limited the Colorado Rockies to one run in eight innings at Coors Field while filling in for Matt Harvey.

DeGrom's velocity sat at 91-93 mph throughout spring training and during an effective outing Friday against the Phillies, when he allowed one run in six innings. Collins and deGrom asserted that the lower velocity readings compared with last season are not the result of injury. They instead believe that deGrom needs time to rebound after pitching through the World Series a year ago. DeGrom averaged 95 mph with his fastball in 2015.

DeGrom will remain with the Mets for now. His wife, Stacey, has not yet gone into labor with the couple's first child in Florida. Her due date was Tuesday.

"We're still waiting on that call," deGrom said. "What are we, five days late now? A call would be nice."

deGrom on injury: Smart not to push it
Jacob deGrom, who is battling right lat tightness and will miss Wednesday's start, says he is feeling a little better and it is smart not to push and will remain with the team until he gets the call from his wife that his first child is about to be born.
Related topics:
sportsespnjacob degrommlbtightnessstartterry collinsnew york metsinjurylogan verrettlatskipped
Copyright © 2020 ESPN Internet Ventures. All rights reserved.
More Videos
From CNN Newsource affiliates
TOP STORIES