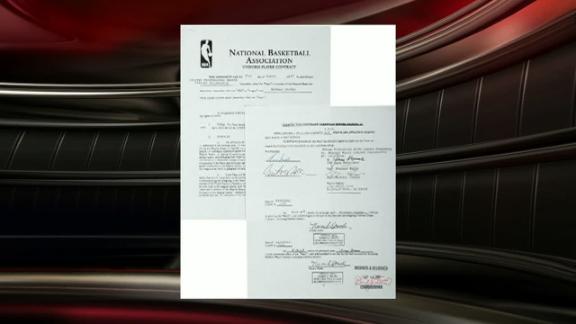 The contract, which Jordan signed for the 1997-98 season, was his last with the Bulls. That season culminated in a sixth championship for Jordan and the Bulls. The contract is signed by Jordan, himself, and initialed by him on each of its 24 pages. It's also signed by Jerry Krause, former Bulls general manager, and Irwin Mandel, the man in charge of the Bulls' finances. It also includes a two-page cover letter from Mandel to the NBA.

The original estimate for the contract's value by the company auctioning it, Dallas-based Heritage Auctions, was $30,000, but with a week remaining until the bidding closes next Thursday night, bidding has already topped $28,000.

"It's hard to compare this to anything we've sold," said Chris Ivy, the company's director of sports auctions. "It's Jordan, who is in a class by himself, and, to our knowledge, this is the only Jordan playing contract to ever surface."

Even still, the contract was once obtained for a bargain. Ivy said the consignor, who prefers to remain anonymous, bought the contract as part of a charity auction in 2000 for less than $1,000.

The most valuable sports contract ever sold was Babe Ruth's 1918, $5,000 Red Sox contract, which was sold in an auction earlier this month for $1.02 million.

Last year, Heritage sold Wayne Gretzky's rookie contract with the Edmonton Oilers, a 10-year, $3 million deal that was signed on his 18th birthday. The contract itself sold for $47,800.

Factoring for inflation, Jordan's $33 million contract would be worth roughly $49 million in today's dollars.

Mint Condition: Jordan's Record Contract For Sale
Heritage Auctions' Chris Ivy breaks down the significance of Michael Jordan's 1997-98 Chicago Bulls contract that is up for auction.