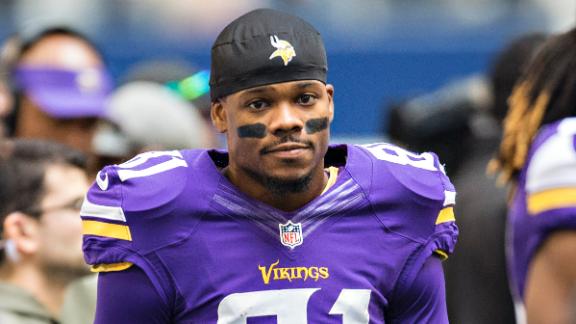 EDEN PRAIRIE, Minn. -- Another Minnesota Vikings player is in trouble with the law -- and in this case, it's a player who has found legal trouble before.

Wide receiver Jerome Simpson has a Nov. 3 arraignment scheduled in Hennepin County for misdemeanor charges of marijuana possession, driving with an open bottle and violating limited license restrictions after he was pulled over in Bloomington, Minnesota, on July 7, according to Bloomington police. Simpson was not arrested but was cited for the aforementioned charges.

Coach Mike Zimmer said he hadn't heard about Simpson's latest run-in with the law until he was told about it by a team PR person on Thursday, and he did not want to comment on it until he'd talked with general manager Rick Spielman.

Speaking generally about the team's recent spate of legal trouble, however, Zimmer said, "We're going to look for high-quality guys. We're going to keep guys who care about football, guys who are passionate about playing the game. We're going to continue to get those guys and keep working. There's really nothing I can do about what everybody else says. All I can do is what I think is best at the time."

Simpson was already serving a three-game suspension at the start of the season after he was arrested for drunken driving last November in Minneapolis. He pleaded guilty to lesser charges of reckless driving on Jan. 2 but was still suspended by the NFL. It was his second suspension in three years with the Vikings, following a three-game ban in 2012 stemming from a marijuana-related arrest in Kentucky in 2011.

Simpson, who caught 48 passes for a career-high 726 yards last season, is due to return from his most recent suspension on Monday, but it's fair to question his future with the Vikings in the wake of his latest trouble.

The terms of his Jan. 2 probation called for Simpson to have no alcohol-related, drug-related or traffic offenses. He could face more legal repercussions and additional league discipline for violating his probation, and his contract with the Vikings calls for him to earn a roster bonus of $3,125 for every game he is active.