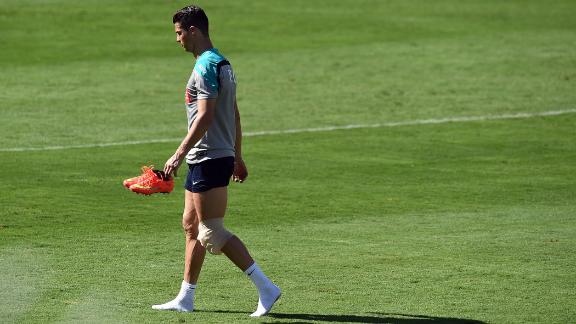 Jose Mourinho has questioned why Portugal gave permission for their latest training session to be broadcast live on television, allowing the world to see Cristiano Ronaldo limping out with an ice pack on his knee.

Mourinho rarely allows cameras to film his players in training at Chelsea, so he was more than a little bemused to witness the preparations of his countrymen ahead of their potentially decisive World Cup clash.

"I really don't understand why Portugal had a training session in front of 10,000 people," said Mourinho in his latest Eurosport blog.

Mourinho is convinced Ronaldo will be fit to play in Portugal's crucial World Cup clash with the United States on Sunday.

"He says he has no problems. The reports in the press... some doctor has denied already making any comments," added Mourinho. "The doctor we have to listen to is the doctor of the Portuguese national team who says that Ronaldo is in great condition.

"He played for 90 minutes [against Germany] so absolutely no problem and the doctor from the Portuguese national team is saying that he is in perfect condition and I really believe he is."

Bradley: Portugal a desperate team
United States midfielder Michael Bradley joins Mike & Mike to talk about defending Cristiano Ronaldo and the tough conditions they will be facing against Portugal on Sunday.

U.S. should beware of wounded Portugal
ESPN FC's Craig Burley speaks to Portugal's current form and the need for Cristiano Ronaldo to come through for his side in their must-win match against the United States.