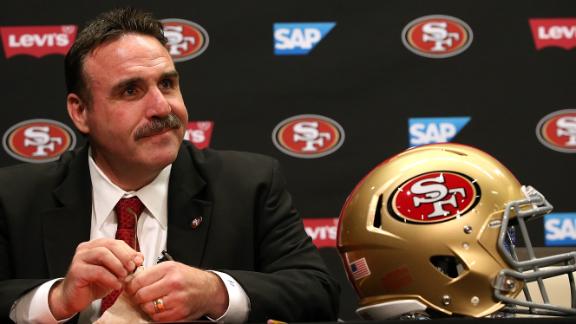 It was a no-frills affair, unlike the pomp-and-circumstance event that was Jim Harbaugh's arrival four years and eight days earlier, a coronation accompanied by sweeping, grandiose music and video highlights.

This event more closely resembled Tomsula, a self-described simple football coach who said he loves his wife, his family and his God, as he was merely adorned by CEO Jed York on his left and general manager Trent Baalke on his right.

"I believe it takes a village," Tomsula said. "No one man does anything by himself.

"I clearly understand the expectation of the ownership, on and off the field."

Tomsula's contract is reported to be for four years, although financials have not been disclosed. For comparison, Harbaugh had a five-year, $25 million deal.

York said at the onset of the coaching search -- the day after Harbaugh and the team "mutually" decided to part Dec. 28 -- that the franchise goal was to win the Super Bowl every year and to "win with class."

He said that even as the Niners' most recent Lombardi Trophy is now 20 years old and they have led the league in arrests the past two years while going to three straight NFC title games.

"I'm not going to write a check," Tomsula said, when asked if the 49ers were going to win the Super Bowl next season. "I'd rather show you ... work towards it."

The elevation of Tomsula, an eight-year defensive line coach for the 49ers whose only previous head-coaching experience came in NFL Europe with the Rhein Fire in 2006, to head coach of the 49ers raised many eyebrows -- especially in light of defensive coordinator Vic Fangio being passed over in favor of a position coach.

Asked why Tomsula was more qualified than, say, Fangio, York did not flinch.

"We're not going to talk about other people," York said, before serving up the platitudes for Tomsula, who was also the Niners' interim coach for one game in 2010. York said Tomsula was hired not for one specific reason, but for his entire body of work with the Niners.

Baalke said he was looking for a "teacher" and a "motivator" and that at the end of the "exhaustive process," Tomsula "checked off all the boxes."

With most of Harbaugh's staff now gone -- running backs coach Tom Rathman is the only assistant of note to purportedly survive the purge, with QB coach Geep Chryst reportedly still under contract and former offensive line coach Chris Foester reportedly replacing Mike Solari -- many wonder who is in line to serve as Tomsula's coordinators, especially given his lack of coordinator experience.

Tomsula said he is in "the process" of filling out his staff but would "rather not go any deeper right now."

"It will be our staff," Baalke said, referring to himself, Tomsula and York.

Tarver ran a 4-3 defense in Oakland but, as Tomsula acknowledged, the Niners' personnel demands a 3-4 alignment.

"You build a team to scheme," Tomsula said.

"I understand my journey is an unusual one," Tomsula said. "I've taken my family on three continents. Nothing has been the norm. I'm used to not normal."