Now and Later Rankings: Best player, best team today -- and who will surprise us in four years 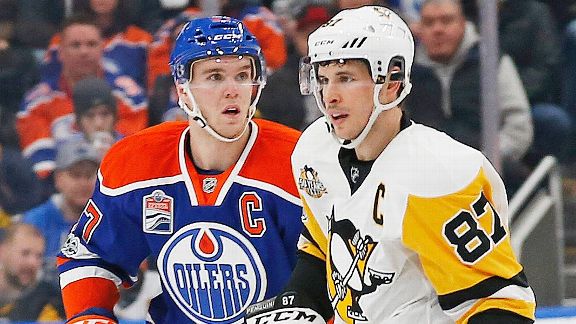 Who is the best team in the NHL now? Who will it be four years from now? Is Sidney Crosby still the face of the league, or has 20-year-old wunderkind Connor McDavid already dethroned thePittsburgh Penguinscaptain?

Speaking of the twice-defending Stanley Cup champions, are they still the team to beat? And how open will the field be four seasons from now?

ESPN.com spoke to more than 50 players, scouts, front-office executives and coaches before the season to take the pulse of how those in the league view both the current landscape -- and what it will look like in the not-so-distant horizon.

So don't worry, Winnipeg Jets fans. You might not be Stanley Cup favorites now, but at least one evaluator likes your odds in 2022! Without further ado, our inaugural Now and Later Rankings:

Who is the best player in the league now?Of the 53 folks who responded to the question, 33 said Crosby. McDavid earned 18 votes, whileOttawa Senatorsdefenseman Erik Karlssonearned two nods. (It should be noted that one of those votes came from a fellow blueliner.)

"I'd say Sid, just because he won the last two Conn Smythes," one veteran player said. "It's so close, though. I think this year will really tell who is the best."

"Connor is not far behind, with the way he played last year," another veteran player said. "But if you're ultimately standing on top at the end [of the season], you've done something right."

"Sidney," one coach responded. "Plain and simple, he makes everyone around him better. He's the guy hoisting the Cup at the end of the season."

A player dissected the dilemma of Crosby vs. McDavid: "You would have to go with Sidney based off the last two years; he won two Cups. He's almost like a skilled grinder, the way he plays. He works so hard. Connor is Connor. His speed is incredible. But those two right now are ahead of the game."

One Eastern Conference front-office executive opted for McDavid: "The kid is unbelievable, has an affect on the game every time he steps on the ice."

You might not be surprised to hear McDavid dominated the "best player in the league four years from now" category. Forty-one of the 53 respondents picked McDavid. Crosby -- who will be 34 years old when the 2021-22 season kicks off -- picked up eight votes, while last year's Calder Trophy winner,Toronto Maple Leafscenter Auston Matthews, tallied four votes.

Said one scout who picked Matthews over McDavid: "It's going to be fascinating to watch these guys go head to head over the next few years. We all know what McDavid is, but I think the ceiling for Matthews is unrealized."

One veteran player who picked Crosby said of the three-time Cup winner: "His work ethic is so incredible. As long as he's healthy, he's going to be on top of this game for a very long time."

As for McDavid, well, we heard a whole bunch of gushing. Here's one coach: "He's a generational talent. He's this good now, and he's only going to get better."

ESPN gathered 39 responses on this topic, and the Penguins dominated, with 31 votes. "They've won the last two years," one NHL coach said simply. "So that makes them the team to beat."

"Yes, [Pittsburgh has] undergone changes," a veteran player said. "But when you have Sid, the same core, and the goaltending is strong, not much changes in my opinion."

Said one veteran player, who assessed the league this summer when determining where to sign a PTO: "When I look at the Blackhawks, I see [Jonathan] Toews, [Patrick] Kaneand pretty much all the same pieces that they had when they won the Cups. I know they didn't do well in the playoffs last year, but they're still very dangerous."

The Oilers earned two nods "because this is the year I think they take the jump," one scout explained.

Receiving one vote each: the Maple Leafs,Tampa Bay Lightning and Dallas Stars.Here's how one veteran NHL player defended his vote for the Bolts: "That team is sneaky good. I don't know why people aren't talking about them."

The Stars' tally came from a player, who noted: "They already were a great team, and then you see what they added this offseason, plus they have [Ken Hitchcock] coaching them now and it's like, 'wow.'"

Here's where we found more parity. No team gathered more than 13 votes (that was the Maple Leafs,a 2017 playoff team that excelled with seven rookies in the regular lineup, headlined by Matthews).

"They're not far off now," one coach said. "And with the young players they have, they're going to be good for a very long time."

More good news for Canadian fans: The Oilers -- who locked up McDavid and sidekick Leon Draisaitl to long-term deals this summer -- were right behind, with 11 votes.

TheColumbus Blue Jacketspicked up three votes. "They showed me a lot last year," one scout said.

The remaining 12 votes were divided among theCalgary Flames, Winnipeg Jets,Lightning, Penguins and Stars. Defending his vote for the Jets, a front-office executive (who does not work for Winnipeg) said this: "Mark my word, they could make a run in a few years."

Team most likely to surprise: Jets

The answers to "Which team is most likely to surprise?" spanned the league. Many of the respondents picked their own teams here (it's good to have faith!). Here are a few responses from players who picked an opponent instead:

"The [Los Angeles] Kings.I just feel like they've been there before and they pretty much have the same players. Sometimes you change things around, get a fresh face with a coach, and it changes things."

"The Carolina Hurricanes. They were so hard to play against last year, and they didn't even make the playoffs. They have better goaltending now, they have a few good players, and I have played for their coach [Bill Peters] at tournaments before. I really like him."

"TheNashville Predators. They came out of nowhere last year, and their team is just so good."

"Maybe Columbus. The Blue Jackets are a pretty good team. They're not going to surprise anyone, but they are still flying under the radar [because of the] big teams in their division."

"Edmonton. The Oilers kind of came to light last year, and I'm sure people are talking about them. I think they have some ways to go, but this is the year that they really, really show they're ready to win it."

"Winnipeg. The Jets are a tough team, they [play in] a tough building. They can sneak through. I mean, look at Nashville last year, right? You just need to get in [to the playoffs]. Winnipeg is just a team that needs to get in, and then who knows?"
Report a correction or typo
Related topics:
sportsespnchicago blackhawksconn smythe trophyhart trophyedmonton oilersmvpken hitchcockcalder trophysidney crosbystanley cup playoffspatrik lainetoronto maple leafsnhlerik karlssonpittsburgh penguinsconnor mcdavidauston matthewswinnipeg jets
Copyright © 2020 ESPN Internet Ventures. All rights reserved.
More Videos
From CNN Newsource affiliates
TOP STORIES