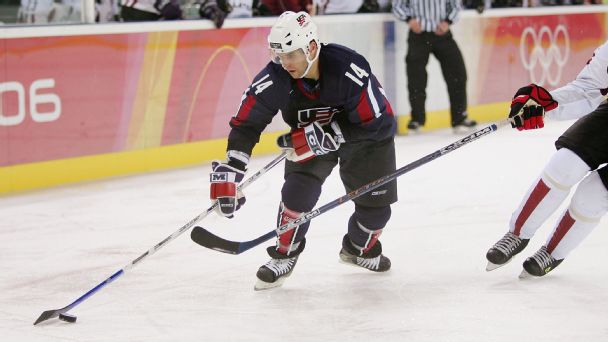 ESPN
By Emily Kaplan
When the 2018 Winter Olympics kick off inPyeongchang, South Korea,next month, NHL players will not take part. It will markthe first time in 20 years that the league has not let playersparticipate in the Games. Here's the lowdown on where things stand and what to expect from men's hockey at this year's Olympics. Editor's note: This is an updated version of a previous FAQ that ESPN published in August.

Wait, so NHL players really aren't going to the Olympics?

Once the NHL scheduled its All-Star Game in Tampa, skipping the Olympics was essentially a done deal. The last three times NHL players went to the Games (2006, 2010, 2014), the league didn't hold a midseason showcase. There is no Olympic break baked into the 2017-18 schedule, and commissioner Gary Bettman has held firm on his stance that the league would not permit its players to go to the Games.

What do the players have to say about it?

Some of the league's biggest stars -- Henrik Lundqvist, Connor McDavid, Alex Ovechkin, Carey Price, Jonathan Toews -- publicly expressed disappointment about not playing in the Olympics. As one veteran player agent told ESPN.com in August: "Good luck finding a player who thinks this is a good idea." Back in April, the NHL Players' Association called the decision "shortsighted," adding that "NHL players are patriotic and they do not take this lightly. A decent respect for the opinions of the players matters. This is the NHL's decision, and its alone. It is very unfortunate for the game, the players and millions of loyal hockey fans."

What does the league have to say about it?

Bettman has addressed the issue several times over the past year. He continually calls the Games "highly disruptive," saying the league's owners were reluctant to take a 17-day break in February when they should be capitalizing on a dead period in other sports: the sweet spot, post-Super Bowl and pre-MLB spring training. Bettman also cited injury concerns from his clubs. In essence, he said, the league doesn't get much out of it. Deputy commissioner Bill Daly addressed the media at the World Junior Championships in Buffalo earlier this month, and said that he believed players "turned the page on the matter."

That depends on your definition of the phrase. At last weekend's All-Star Game, NHLPA executive director Don Fehr chimed in. "If he means by turn the page they've come to terms with the fact that they're not going to Pyeongchang, I think he's right," Fehr said of Daly's comments. "If he means turn the page permanently, I have zero indication that's true." In fact, during the All-Star Game festivities, several players addressed the upcoming Olympics, includingPhiladelphia Flyerscaptain Claude Giroux. "It's a little frustrating, not just personally but for any player who had a chance to go represent his country," Giroux said. "It's a lot of guys' dream. It sucks, but what are you gonna do?"

Let's back up for a minute. How did we get to this point?

The crux of the issue is a power play between the NHL, NHLPA and the International Olympic Committee. The league wanted the IOC to make concessions, which it didn't. The NHLPA wanted the sides to get it done. This could be used as a bargaining chip between the union and the league when the current collective bargaining agreement expires after the 2021-22 season. (Each side has an opt-out clause in 2019, meaning the deal would expire in 2020). When asked last weekend how much of an emphasis the Olympic issue would be during the next CBA negotiations, Fehr said: "It's impossible to say at this point. One would like to believe, if we could ever get a long-term agreement on international [games], we'd find a way to address it."

Why didn't anyone intervene?

Four agencies tried to hash it out -- the NHL, the NHLPA, the IOC and the International Ice Hockey Federation -- with no luck. The IOC has previously funded players' travel and insurance (which, in 2014, amounted to $14 million). When the IOC took that off the table, the IIHF stepped in and offered to cover $10 million. It was a nice gesture, but it didn't resolve all of the issues, including interrupting the NHL season for three weeks. The IOC issued a statement in April saying it "feels very sorry for the athletes."

The 2022 Olympics will be in Beijing. The NHL is interested in establishing a presence in China -- the league sent the Vancouver Canucks andLos Angeles Kingsthere for preseason games in Beijing and Shanghai last September, and is planning another trip for 2019 -- but that doesn't necessarily mean the NHL is going to change its stance. "Could that circumstance change at some point in the future?" Bettman said at All-Star Weekend. "I suppose so, but it's not something we're currently contemplating." So you're telling me there's a chance!

So who is in charge of Team USA?

The team was selected by longtime USA Hockey exec Jim Johannson, who passed away suddenly this month at age 53. The coach of the team is Tony Granato. You might remember Granato as a player -- he was a 1988 Olympian and played for the New York Rangers, Los Angeles Kings and San Jose Sharks -- or as a coach. He coached the Colorado Avalanche for three seasons, was an assistant for the Detroit Red Wings, and in 2016 became coach at his alma mater, Wisconsin. (You might also know Granato because his sister, Cammi, is one of the greatest American hockey players ever.) Assisting Granato are familiar faces, including former NHL starsChris Chelios and Scott Young. Yep, that Chris Chelios and that Scott Young.

It will include a lot of names you don't know now -- but might soon. The Americans opted for experience, primarily choosing players who were standouts in European professional leagues. Some of them are players you might remember from the NHL (like one-time 48-goal scorer Brian Gionta), while others didn't quite make it to the show (Chris Bourque, son of of Hockey Hall of Fame defensemanRay Bourque, is a longtime AHL player). There are four current college players on the roster, including Boston University's Jordan Greenway, the first African-American to represent Team USA in hockey at the Winter Olympics. Team USA decided not to play some of its rising stars who were eligible, such as 19-year-oldBuffalo Sabres prospect Casey Mittelstadt or Harvard defenseman Adam Fox (also 19).

Does Team USA have any shot to win gold?