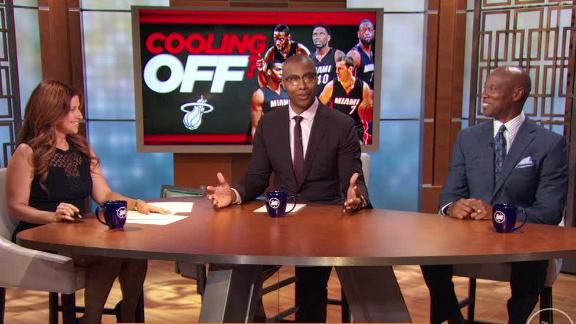 In confirming for the first time publicly that Bosh had a recurrence of blood-clotting issues, Riley said the Heat are hopeful of reaching a medical resolution that would allow Bosh to continue playing.

An 11-time All-Star forward, Bosh, 32, missed the final 29 games of the season after he was diagnosed in February with a medical condition neither he nor the Heat initially disclosed. It was the second year in a row that his season was cut short at the February All-Star break because of health concerns that stemmed from blood clot issues.

"All of us -- the Heat, the doctors and also Chris -- are looking to proceed forward to find a way to get him back on the court," Riley said Wednesday in his season-ending session with the media. "Last year, we were blindsided. This year, when it happened, we're eyes wide open with him. We all knew what the treatment was last year. It's two years in a row. We're all day-to-day in proceeding with this thing."

Riley described Bosh's condition as "a haymaker" that rocked the team and could have a major impact on how the Heat move forward into free agency. He also said it was too soon to know what kind of time frame Bosh is facing before a specific determination is made about his playing future.

Bosh's status was the first issue Riley addressed in a 46-minute news conference at AmericanAirlines Arena, where players and the coaching staff wrapped up exit interviews Tuesday amid a multitude of unanswered questions facing the franchise. Bosh did not meet with the media Tuesday and was unavailable for comment Wednesday.

Bosh and the Heat issued a joint statement May 4 to declare he would not return this postseason but that the sides would work together "to return Chris to playing basketball as soon as possible." Bosh still has three seasons and roughly $75 million remaining on the five-year contract he signed in 2014.

Miami will try to build on a 48-win season that ended Sunday in a Game 7 loss on the road to the Toronto Raptors in the second round of the playoffs.

After losing Bosh in 2015, the Heat went 15-15 over the final 30 games, finished 37-45 and missed the playoffs for the first time in six years amid their first season after LeBron James' return to Cleveland.

This time, Miami went 19-10 after Bosh left the lineup, secured the third overall playoff seed in the East and defeated Charlotte in seven games during the first round before falling to Toronto.

"I really think we took a major step forward this year," Riley said. "When you objectively look at where we were two years ago and where we are today, the possibilities ... the flexibility we created."

That flexibility leaves the Heat with at least $40 million in salary-cap space to spend in free agency this summer, though most of that amount is likely set aside to retain Whiteside and Wade.

Riley said Wednesday that the team's top goal is to bring back Whiteside, who hits the open market in position to command a deal that could be worth up to $100 million over four years.

Whiteside, 26, earned just $990,000 in his second season with the Heat. A 7-foot center, he led the NBA in blocked shots and also finished in the top five in rebounds and field goal percentage. Whiteside suffered a sprained MCL in his right knee in Game 3 against the Raptors and missed the final four games of the series.

Riley also would not rule out pursuing other top free agents. Among those most coveted throughout the league on July 1 stand to be Kevin Durant, Mike Conley, Al Horford, Pau Gasol and Nicolas Batum.

Wade, 34, is also a free agent for the second straight summer. He said Monday that he doesn't expect negotiations with the Heat to be as tenuous as they were last summer before the sides came together on a one-year, $20 million contract.

Wade is coming off his healthiest season since 2010, having played in 74 games and averaged 19 points, 4.6 assists and 4.1 rebounds during the regular season. His production was even higher in the playoffs, when Wade averaged 21.4 points, 5.6 rebounds and 4.3 assists through 14 games.

"We know where he belongs. The day we give him his contract, then I'll go to him to cash my check." 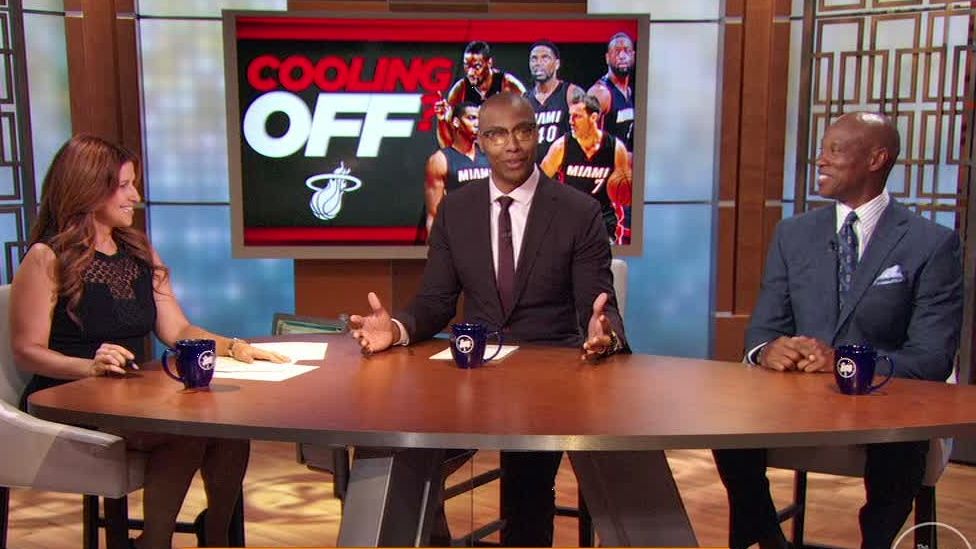