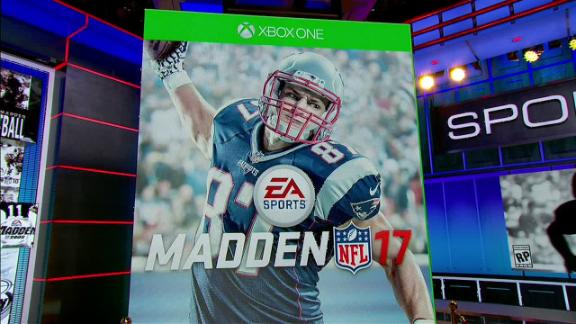 ESPN
By Mike Reiss
This might call for a celebratory "Gronk" spike.

New England Patriots tight end Rob Gronkowski -- a transcendent talent at the position and one of the NFL's most popular players -- will be on the cover of "Madden NFL '17," it was announced Thursday night on SportsCenter.

Gronkowski is the first tight end to grace the Madden cover and is also the first Patriots player to be selected.

"My rookie year [in 2010], it was just an honor to be in the game, just using yourself as a player, throwing yourself the ball every single time you can at home, just playing the game," Gronkowski told SportsCenter. "Now it's a dream come true, going into my seventh season and being on the cover.

"When I first found out, I was blessed. It was a surreal moment."

The announcement came just hours after it was revealed that Gronkowski also is featured on the cover of GQmagazine alongwith model Hailey Clauson.

Said Gronkowski: "It's been a great day."

"I've been close to being on the cover of Madden. Last year, I lost to Odell; he's an excellent player," Gronkowski said. "When I found out that I was truly going to be on the cover, it was a great feeling.

"I really didn't celebrate it. ... It was a feel-good moment, for sure, to know that you're going to be on the cover of Madden in the category of so many elite players out there that have been on it before."

Over the last two seasons, Gronkowski has totaled 154 receptions for 2,300 yards and 23 touchdowns. After each touchdown, his trademark is to forcefully spike the football into the ground.

This season, however, will begin with uncertainty at the quarterback position after a three-judge panel of the 2nd Circuit ruled 2-to-1 on April 25 that commissioner Roger Goodell did not deprive Tom Brady of "fundamental fairness" with his procedural rulings in the Deflategate case.

Gronkowski said he was with Brady that day when the four-game suspension was upheld.

"It was actually a surprise -- a surprise to everyone," Gronkowski said. "I thought it was totally done (the Deflategate saga). It was crazy just even seeing that happen again. It's kind of getting stupid, getting to the point where it's at now -- why it's still going on and all."

Brady has until May 23 to file written arguments to the 2nd U.S. Circuit Court of Appeals in an attempt to overturn his four-game suspension.

"No matter who's at quarterback, you've got to be prepared and be ready to help out the team."

In the past five years, a fan vote decided which player would be on the Madden cover, but the process changed this year.

Gronkowski isn't worried about the "Madden curse" creeping up this season, either.

"It's definitely reversed itself from back in the day," Gronkowski said. "You have to look at the players that were on it recently. You have Odell, who had an unbelievable year last year. You have Richard Sherman, who went to the Pro Bowl the year he was on it. Calvin Johnson, who broke the receiving record when he was on the cover.

"It's the present now. It's the future of the cover. I feel like I've already went through all my injuries at that time, so I feel like I'm good. I'm blessed right now to be on it. I feel like everything is going to go smoothly."