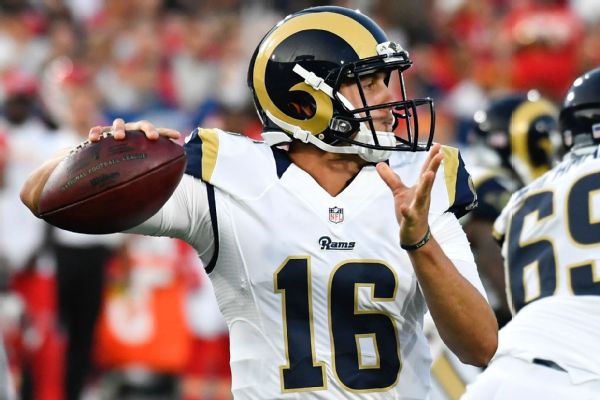 NEW ORLEANS -- Los Angeles Rams quarterback Jared Goff threw his first career touchdown pass on the first drive of Sunday's game against the New Orleans Saints at the Mercedes-Benz Superdome, and it was a beauty.

He added two more touchdown passes in the Rams' 49-21 loss and finished the game with 214 yards, completing 20 of his 32 pass attempts. He also committed his first two NFL turnovers, losing a fumble and throwing an interception.

On his first touchdown pass, Goff took a snap from the shotgun and tossed a perfect, 24-yard lob to 5-foot-8 receiver Tavon Austinto givethe Rams an early 7-0 lead.

His other touchdowns came in the second quarter, on a 6-yard pass to receiver Kenny Brittthat gave the Rams a 14-7 lead, and a 15-yard pass to tight endLance Kendricksthat cut the Rams' deficit to 28-21 just before halftime.

Goff also lost a fumble on a sack by Saints rookie defensive tackle Sheldon Rankinsin the second quarter and threw an interception on a pass intended for Kendricks that was picked off by safetyKenny Vaccaroin the third quarter.

Goff's first touchdown pass completed a drive that saw he and the Rams gain 75 yards in less than three minutes. It began with a 31-yard catch-and-run to struggling running back Todd Gurley and also included a 17-yard back-shoulder throw to primary receiver Kenny Britt, who is having a career season.

In his debut last week, a 14-10 loss to the Miami Dolphins, Goff attempted only five passes that traveled more than 10 yards, all of which fell incomplete.