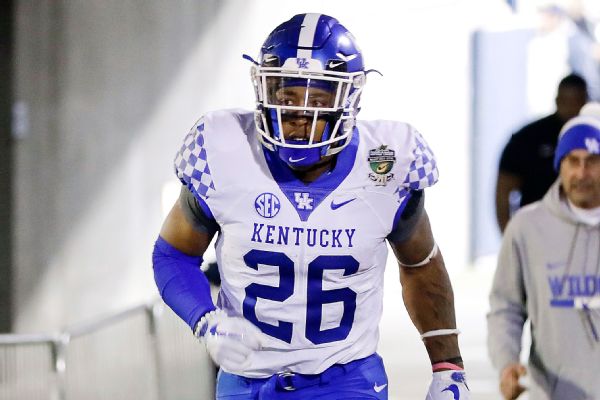 Pac-12 referee Chris Coyte and his crew have been the target of threats and harassment by fans in the wake of a controversial decision to eject Kentuckyrunning back Benny Snell from the Wildcats' 24-23 loss to Northwesternin the Franklin American Mortgage Music City Bowl on Dec. 29.

Coyte's decision to eject Snell for making contact with him was widely criticized after video replay showed minimal, inconsequential contact between the two following a play early in the second quarter. In an interview with a pool reporter after the game, Coyte reaffirmed the decision to eject Snell, and the Pac-12 later stood by the call.

In the days following the game, Coyte received a barrage of threatening calls to his cell and office phones, sources said, as did the commercial real estate association he belongs to.

The officiating crew received an escort leaving the stadium and getting to the airport from a security consultant, but further security protection wasn't necessary upon leaving Nashville, according to the Pac-12.

The harassing calls began to die down until last week, sources said, when a letter from Kentucky athletic director Mitch Barnhart to the Pac-12's vice president of officials, David Coleman, critical of Coyte and his crew was made public by the Lexington Herald-Leader, which reported it obtained the letter through an open records request.

When contacted by ESPN for comment regarding Barnhart's letter, the Pac-12 made it clear it felt his decision to reach out directly to Coleman was a break from protocol.

"We're happy to discuss the matter with the SEC," the Pac-12 said in a statement. "We're particularly sensitive about this issue because our officials have received threats and we are concerned about their safety."

In separate statements to ESPN, Kentucky and the SEC both expressed a similar belief that there is not an outlined protocol for how to elevate these concerns.

"We are not aware of any protocols for this kind of situation," the Kentucky athletic department said in its statement. "We made contact with the Southeastern Conference office and made them aware of our concerns. We expressed those concerns to the SEC and to the Pac-12 office."

Added the SEC: "The University of Kentucky expressed its concerns about specific instances related to officiating in the Music City Bowl to both the SEC and the Pac-12 offices. There has been no universal protocol related to communicating concerns about post-season bowl games. The SEC has no further comment on this matter."

Barnhart's letter, dated Jan. 5, called into question the professionalism of Coyte and line judge Tim Messuri and specifically mentioned two incidents in the game. The first was Snell's ejection, of which Barnhart wrote he was not deserving.

"The intent of the no-contact rule - protection of the officials - was not adhered to in this case," he wrote. "Video of the incident does not support the call made on the field or the statement made by the officiating crew postgame and later supported by the Pac-12. Moreover, the character and intent of a quality young man in our program have been unfairly called into question as a result."

The second incident Barnhart cited was a sequence following a hit near the sideline of Kentucky quarterback Stephen Johnson. Johnson was tended to by the team's medical staff following the play, but Barnhart wrote that he "perceived a lack of care for the well-being of our players that I believe needs to be addressed."

"Specifically, head referee Chris Coyte seemed to have no care for our injured player or willingness to allow our team a few moments to prepare a substitute quarterback to replace him, which is normal protocol in such a situation."

It's unclear what protocol Barnhart is referring to, because there is not a rule that stipulates a warm-up period be granted following injuries. The Wildcats sent out their field goal unit immediately following the play, which a review of the television footage shows was whistled dead by the officiating crew 25 seconds into the play clock when it became clear Johnson was hurt.

Play remained stopped for approximately two minutes and Johnson was shown on his way to the locker room before the ensuing snap took place, which occurred after an unsportsmanlike conduct penalty was issued against Kentucky, forcing a punt.

The harassing calls to Coyte and his crew are not the first directed at officials by fans following a Kentucky postseason loss in the past year. NCAA basketball referee John Higgins also dealt with threats and calls to his home and workplace after he officiated Kentucky's loss to North Carolina in the Elite Eight in March.

At the time, Kentucky released a statement promoting good sportsmanship.

"While we were all disappointed to see a memorable season end on [March 26, 2017] and we appreciate the support our fans showed our student-athletes all year, we encourage our fans to demonstrate good sportsmanship to everyone and discourage any other kind of behavior," the statement said.