Ventura announced Sunday that he will not return as theChicago White Sox manager next season. He insisted it was his decision and he wasn't pushed out because of a fourth consecutive losing season. Ventura was in the last year of his contract.

"I enjoy this place. I love this place," a stoic Ventura said after Chicago's season-ending 6-3 loss to the Minnesota Twins. "At the end, it probably needs a new voice."

The Chicago Sun-Times reported Saturday that bench coach and formerCubsmanager Rick Renteria will likely take over, but the team did not immediately announce a replacement. White Sox general manager Rick Hahn is scheduled to address reporters Monday.

Ventura said he "initiated" the departure.

"You just realize right now is the right time to do it, and you need somebody else," Ventura said.

Ventura went 375-435 in five seasons with the White Sox. After an 85-77 debut in 2012 that wasn't good enough for the playoffs, Ventura's teams regressed.

The White Sox finished 78-84 this year, despite a 23-10 start that gave them a six-game lead in the AL Central on May 9. Thanks to injuries, a slumping offense and a shaky bullpen, the White Sox stumbled to a 55-74 mark the rest of the way and a fourth-place finish amid a couple bizarre off-field incidents.

In July, Sale was suspended five days for cutting up collared throwback jerseys he didn't want to wear for a start. Sale later criticized Ventura for not sticking up for him in his dispute with the marketing staff.

"You have moments -- I don't know if they're disagreements -- but there are some terse conversations that you have," Ventura said. "That's just part of being together and part of a lot of competitive people being in a room. That just happens. But at the end of the day, I know they went out and competed. And that's the biggest thing."

Sale allowed an inside-the-park home run to the speedy Byron Buxton on the first pitch Sunday. Miguel Sano added a three-run shot in the third as Sale was denied his career-best 18th win after allowing five runs and six hits in five innings.

Sale, who finished with a 3.34 ERA and 233 strikeouts, denied that there was any trouble with his manager.

"What did we have, a couple things that made it in the news?" Sale said. "That doesn't mean I don't like him or he didn't like me. We always had the same goal, the same vision, the same passion.

"You get a bunch of guys in the same room, and the testosterone is pumping. This is a competitive game. Sports are competitive. Things happen, but that doesn't change what I think of him personally. He's as good as they get."

The easygoing, friendly Ventura had fans in the clubhouse. Right-hander James Shields called him "one of the better managers I've been around." Third baseman Todd Frazier said "I love him to death," and outfielder Adam Eaton praised the 49-year-old's demeanor and communication skills.

"He hasn't had an easy road while he's been here, I'll tell you that much," Eaton said. "For me, in the three years I've been here, you put it on the players. Players haven't played up to expectations. It's our fault."

Ventura was a fan favorite as a slick-fielding third baseman on Chicago's South Side. The 10th overall pick of the 1988 draft won six Gold Gloves and was a two-time All-Star over a 16-year career spent mostly with the White Sox and Mets.

Ventura had no managerial experience and was a surprise hire of then-GM Williams after the 2011 season, following Ozzie Guillen's messy exit.

The White Sox have tried to contend in recent seasons by bringing in high-profile players such as Adam Dunn, Jeff Samardzija, David Robertson, Melky Cabrera, Eaton, Frazier and LaRoche. But the White Sox didn't improve under Ventura, and the team's recent struggles have coincided with the resurgence of the crosstown Cubs, who have the majors' best record and have drawn more than 3 million fans. The White Sox drew fewer than 1.75 million this season.

"You look throughout sports, not only baseball, when teams that are supposed to do well don't do well, changes are made," catcher Alex Avila said. "Not only with coaching staffs and personnel off the field but on the field as well."

The White Sox might be turning to a former manager of their rivals. Renteria went 73-89 with the Cubs in 2014, only to be let go after one season, when Joe Maddon became available. The 54-year-old Renteria just finished his first season as bench coach with the White Sox.

"I think he's got a lot of qualities that Robin has. Maybe a little more vocal," Eaton said. "He definitely will get his point across a little more, vocally. Not that he has more passion than Robin or anything like that, but he's a little more upbeat, a little more bouncy. He's kind of a bundle of baseball joy."

Renteria's bilingual skills and history of working well with younger players would be strengths for a team potentially heading for a rebuild with many Spanish-speaking players.

"It would be a little bit more comfortable or make communication easier, but I was good with Robin," Cuban slugger Jose Abreu said through an interpreter. "I didn't have any kind of trouble with Robin to communicate."

Hahn earlier this season called the team "mired in mediocrity" and hinted at tearing down the roster, something 80-year-old chairman Jerry Reinsdorf has resisted in the past. Since they won the World Series in 2005, the White Sox have just one playoff appearance, in 2008.

Sale, who has a team-friendly contract, could bring in a large haul of prospects. So could fellow lefty Jose Quintana.

"This is sports. Anything can happen," Sale said. "I don't anticipate that happening or necessarily really want that to happen, but it could." 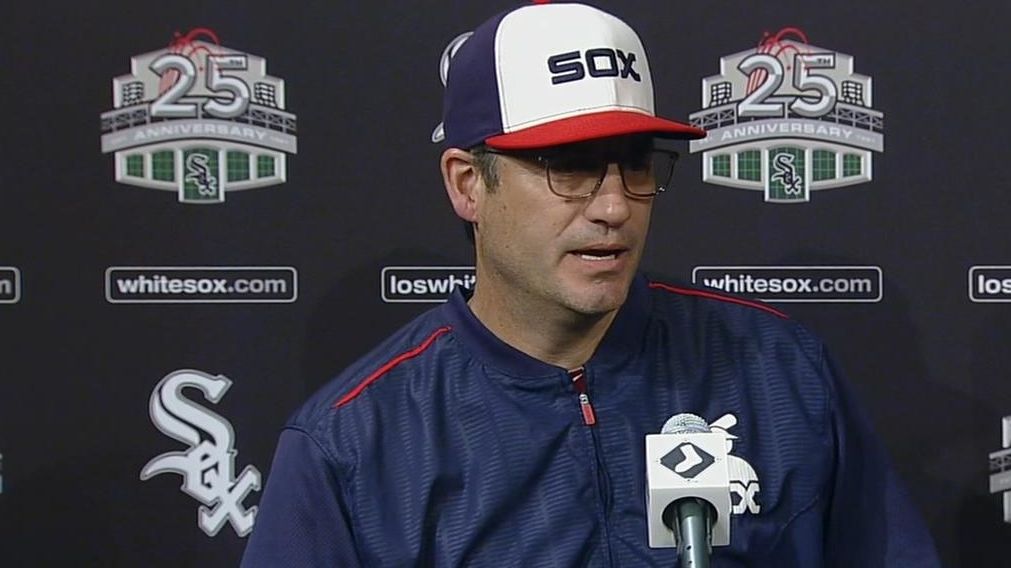