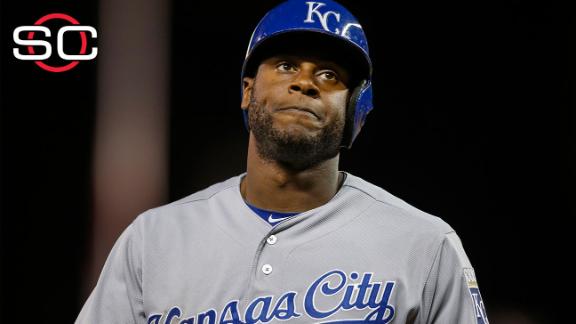 KANSAS CITY, Mo. -- Lorenzo Cain was hoping that nobody saw him throw the punch.

Then the Royals outfielder learned just how many video cameras there are in big league ballparks these days.

After seeing footage that Major League Baseball has of him throwing the haymaker in a brawl with the White Sox last month, Cain dropped his appeal of a two-game suspension Sunday. Along with missing the series finale against Detroit, he will miss Tuesday's game against Cleveland.

"I had a hearing tomorrow. Then people I spoke to said I had zero chance of winning, so get it knocked out and get back to playing baseball," Cain said.

When asked why, he replied with a smile: "They had some really good angles."

The Royals have played a handful of testy series this season, but Cain -- who has been hit by pitches four times already -- finally had enough in Chicago. The usually mild-mannered outfielder said even his friends and family were surprised by the way he lashed out.

"They'd never seen that side of me," Cain said. "They thought I was crazy or something."

Royals manager Ned Yost said the biggest problem with Cain's suspension is that he'll be reduced to only catcherErik Kratzand utility man Orlando Calixte off his bench.

"Calixte can play just about any position," Yost said. "We just hope nobody gets hurt."

Royals pitchers Edinson Volquez and Yordano Ventura already served suspensions for their roles in last month's brawl in Chicago. Kelvin Herrera is still appealing his two-game suspension along with a separate two-game ban for an earlier incident against Oakland.

Herrera may drop his appeal soon, though. All-Star closer Greg Holland is expected to come off the disabled list Tuesday, which would make losing Herrera a bit more palatable.

The Royals still have four more series scheduled with the White Sox, but Cain said he doesn't think there will be any lingering angst when the teams next meet July 17 in Kansas City.

"I think it's over with. A lot of punches were thrown, a lot of frustration came out with that brawl, but to me, it's over," he said. "We're role models. We have to respect the game."