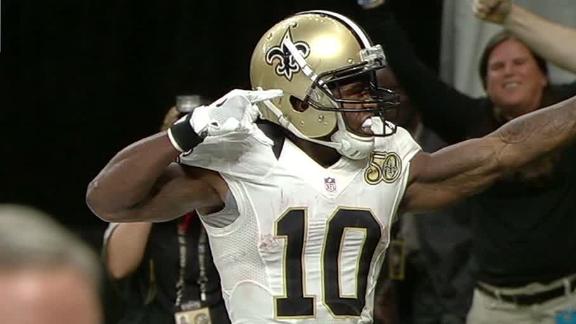 NEW ORLEANS -- Despite a heart-wrenching loss on Sunday, Drew Brees is still lighting up the record books at age 37.

The veteran quarterback's 98-yard touchdown pass to wide receiver Brandin Cooks in the third quarter of Sunday's 35-34 loss to the Oakland Raiders was the longest offensive play in the 50-year history of the New Orleans Saints.

It was also the longest pass of Brees' 16-year career.

"I just felt like we had an opportunity to run by this guy to our left [cornerback Sean Smith] and Brandin got a great release," Brees said. "Threw it up to him, and he did the rest. I mean, he looked like Usain Bolt rolling down the sideline there."

The previous record for the Saints came all the way back in their first season in 1967 -- a 96-yard pass from Billy Kilmer to Walt Roberts.

Yet the day ended on the sour note for New Orleans as rookie kicker Wil Lutz missed a 61 yard field goal with five seconds left in the game to lose it for the Saints.

After the game, both Brees and coach Sean Payton lamented the missed opportunities.

"Obviously we could do without the turnover on the first possession," Brees said of a sack-fumble that set up a Raiders field goal. "Completely my fault. I just held on to it too long ... should've just punted and moved on. Because obviously that's three points and when you look at the end of the game, that three points matters."

Brees' four touchdown passes on Sunday gave him a career total of 432, which broke his tie with New England Patriots quarterback Tom Brady for third place on the NFL's all-time touchdown pass list.

They both started the day with 428, but Brees' touchdown pass to Cooks was his third of the afternoon.

Brees is also closing in on Dan Marino for third place on the NFL's all-time passing yardage chart. Brees began the day needing 458 yards to tie Marino with 61,361 yards; Brees ended the day with 423 yards through the air.