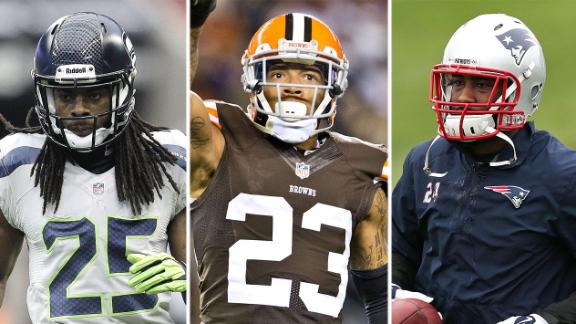 Peterson recently became the highest-paid cornerback in the NFL with a $70 million deal that includes $48 million guaranteed. Sherman signed a new contact in the spring worth $56 million, with $40 million in guaranteed money.

So Sherman and Peterson have continued to take verbal shots at each other on Twitter about which player is the best corner in the league.

"It's all fun," Sherman said Monday on 710 ESPN Seattle. "We're just trying to see who's the most clever. We're friends. We've known each other since the [NFL] combine [in 2011]. We've worked out together and he's a great dude."

Peterson said last week that he also has fun with his tweets to Sherman.

"Much, much different," Sherman said.

Sherman's national TV rant against Crabtree moments after the NFC Championship Game in January was one of the most talked-about incidents of the season.

Sherman tipped a pass in the end zone intended for Crabtree in the final seconds of the game, resulting in an interception by Seahawks linebacker Malcolm Smith. The play sealed a 23-17 victory for Seattle and sent the Seahawks to the Super Bowl, which they won 43-8 over the Denver Broncos. Sherman ran across the end zone to reach Crabtree after the play, extended his hand and told him, "Good game." But Crabtree pushed Sherman away.

Sherman was asked Monday whether he would have handled the postgame interview differently had Crabtree shaken his hand.

"That's probably true," Sherman said. "The animosity would still be there, but I probably wouldn't have gone off on him like that. But he didn't [shake my hand]."

Sherman's postgame comments on the Fox telecast are what many people remember.

"I'm the best corner in the game," Sherman screamed. "When you try me with a sorry receiver like Crabtree, that's the result you're going to get. Don't you ever talk about me."

When Fox reporter Erin Andrews asked him who he was talking about, he replied: "Crabtree. Don't you open your mouth about the best or I'll shut it for you real quick. L.O.B. [Legion of Boom]."

Sherman also was asked Monday whether he would have shaken Crabtree's hand had Crabtree caught the pass for a likely game-winning touchdown.

"Yeah, I would have shaken his hand," Sherman said. "But that universe doesn't exist. If ifs were fifths, we'd all be drunk."