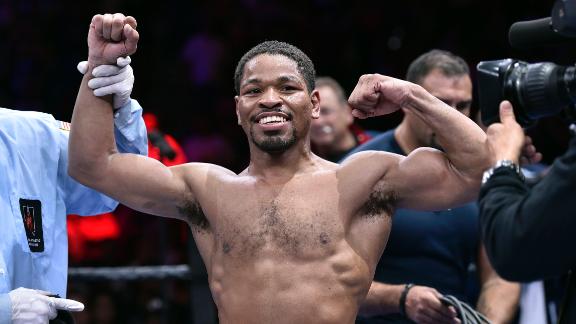 LAS VEGAS -- "Showtime" Shawn Porter put on a show as he dominated Adrien "The Problem" Broner for a unanimous decision victory in a non-title matchup of top welterweights Saturday night in the main event of a Premier Boxing Champions card at the MGM Grand Garden Arena.

Although Porter was the clear winner, there was major drama in the 12th and final round when Broner, surely knowing he was down on the scorecards, came out fast and leveled Porter with a wide-open left hand in the first minute.

Porter seemed OK but still had more than two minutes to survive as Broner came at him with everything he had. But Porter, who appeared to be in tremendous condition, was able to stave off Broner in the frantic final minute of the fight to secure the unanimous decision, much to the delight of the pro-Porter crowd of 8,138, which included card co-promoter Floyd Mayweather.

"This was a great fight for us and a great win. We are going to enjoy this fight and keep going," Porter said.

Porter and Broner, both former welterweight titleholders, knew going into the fight that a win -- in front of a national television audience on NBC in prime time -- would put them in position for another major fight. A bout against Mayweather, who plans to fight Sept. 12 to finish his Showtime/CBS contract, is a long shot but not out of the question for Porter.

Porter, who lives in Las Vegas but is from Akron, Ohio, put it all together against Cincinnati's Broner to win the battle of Ohio.

"That's how you beat a great fighter intelligently," Porter said. "We did everything we needed to do in preparation for this fight, and coming out we wanted to establish our jab and establish that we are the better boxer. I think we did that over the course of the fight."

Kenny Porter, Shawn's father and trainer, got a great Father's Day present with the victory.

"It was a very good performance. AB put on a great performance as well. He showed what a champion does when he caught Shawn with that shot," he said. "Shawn showed a champion's heart and came back, and they battled all the way to the bell."

The 12th round was really Broner's only big moment of a fight he otherwise did little in -- other than hold and try to push Shawn Porter back with forearm shots.

"Listen, I still will fight anybody. It don't matter, man. I'm a real animal. I'm an animal," said Broner, a former three-division titleholder. "This time I didn't get the decision, but it's OK. At the end of the day, everybody in here will take my autograph and take my picture."

Broner and Porter have a friendly relationship outside the ring, but it was strained by Broner's constant trash talk leading up to the fight. Porter kept things professional. After the fight, Broner said he would be happy to resume their good standing, but added a dig.

"We still can have dinner. I'll take his girl out and everything," Broner said.

Porter (26-1-1, 16 KOs), with the crowd on his side, started fast and clearly hurt Broner (30-2, 25 KOs) in the first round when he landed three left hands and sent Broner into the ropes. Broner had to hold on as he tried to collect himself. That became a the pattern of the fight.

He pressed the action throughout but thought he could have done even more.

"Honestly, my dad wanted a quicker and faster pace," said Porter, who won his second fight in a row since losing his world title by majority decision to England's Kell Brook last August. "That's why you have a corner. I think if I would have listened to him a little bit better, I would have fought a little bit better. [There are] things you can learn about and you can build upon."

Porter continued to attack Broner in the second round, backing him into the ropes. Broner was not throwing many punches and looked to tie Porter up at every opportunity. Referee Tony Weeks finally warned Broner for excessive holding in the third round, during which Porter caught Broner with a solid left hook to the cheek that forced him to tie up yet again.

Porter's physical strength advantage was obvious in the fourth round. He was all over Broner and relentless with his left hooks upstairs and to the body. Broner landed punches, but only one at a time.

Broner, who earned $1.35 million, had a decent sixth round, catching Porter, whose purse was $1 million, with some clean shots, but they did not seem to have much impact on Porter, who brushed them aside and continued to come forward.

In the seventh round, Weeks gave Broner a hard warning for punching at Porter from behind and over his head after spinning out of a clinch. He did it twice, and Weeks was not pleased, but he allowed Broner to hold constantly during the fight, warning him time and again.

Broner, 25, struggled to find any consistency on offense. He didn't use his jab much at all (landing only 20) to get inside. He also rarely threw combinations and instead spent time clowning and trying Weeks' patience, like when he stiff-armed Porter in the ninth round and was warned.

Porter, 27, drew cheers from the crowd in the 10th round when he landed a clean right hand across Broner's face. After holding throughout the fight, Broner did it again the 11th round, and Weeks finally took a point from him, eliciting cheers from crowd.

A desperate Broner came out charging in the 12th round and got the knockdown, but he could not finish Porter off.

It was more than OK for Porter.

"We tried to stick in some pressure as well, just to establish dominance," Porter said. "And I think that's what got us to the scores that we got and the win."