Sky will keep grinding this season, but future might be brighter 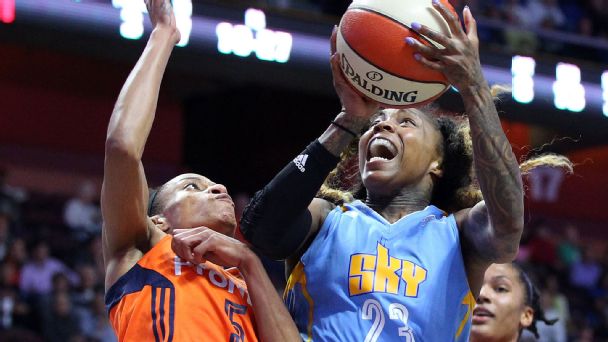 Just before the WNBA All-Star Game, Chicago seemed to be on the ascent. At that point, the Sky had won five of their last six games.

That stretch started July 8, when they crushed WNBA giant Minnesota 100-76. The Lynx were coming off an emotional win over the Sparks two days earlier, but still, it was a big victory for Chicago. Then with wins at New York, Seattle and Los Angeles, the Sky looked to be a force to be reckoned with.

But now, only two weeks after an 82-80 triumph against the Sparks on July 20 -- highlighted by a late 3-pointer from Stefanie Dolson and two blocked shots from Imani Boyette -- we're instead left wondering if the Sky are even contenders to make the playoffs this season.

Since the All-Star Game, the Sky have lost three in a row -- at Connecticut, and at home to Phoenix and New York -- and then Monday traded away 10-year veteran Tamera Young and Boyette, the No. 10 draft pick in 2016, to Atlanta for reserve Jordan Hooper and a 2018 first-round draft pick.

Chicago is 8-16 and tied for next to last with the Fever, who are the Sky's opponent Friday in Indianapolis. Chicago has 10 games left, including four in a row at home from Saturday to Aug. 20. Maybe the Sky still can grab a postseason spot, although that seems less likely now than it did two weeks ago.

But whatever happens over the next month-plus, it's clear with Monday's trade that the Sky are looking a lot toward 2018. They dealt a starter in the 6-foot-2 Young, who is in her 10th season and is one of the league's more versatile defenders. She is averaging 10.2 points and 3.8 rebounds in 29 minutes per game, and her contract is up at season's end. The 6-7 Boyette came off the bench and averaged 4.6 points and 4.4 rebounds in 15 minutes per game.

Hooper would have to increase her output dramatically to even have an impact for the Sky; each of her four WNBA seasons, all of her numbers have trended downward. This season, she was at 2.6 points for the Dream, playing just 6.2 minutes per game. She is not a replacement for Young, by any stretch, but maybe she'll get a little more court time in Chicago.

Second-year guard Kahleah Copper -- one of the players the Sky got from Washington in the offseason deal for Elena Delle Donne -- seems likely to see her minutes increase the rest of the way with Young gone. She is averaging 11.7 minutes and 5.1 points.

Giving Copper more time to develop fits in with the "look to 2018" philosophy. As does, of course, obtaining another first-round pick in next year's draft. Where that pick will land depends on how the Dream finish, but the 2018 draft class is widely acknowledged as a good, deep group.

What we shouldn't expect, though, according to Chicago coach/general manager Amber Stocks, is the imminent WNBA debut of center Alaina Coates. She was the Sky's top pick -- No. 2 overall -- in April but has been rehabbing the ankle injury that cut short her senior season at South Carolina.

"I don't anticipate that Alaina will be playing and able to produce for the remaining 2017 season," Stocks said. "Of course, that can change at any moment. She is active in her rehab and recovering. She is progressing very well. She's a hard worker, she's focused, she's passionate about the game. She's doing all the right things to put herself in position to continue to excel at the professional level."

Since that statement basically says two things -- Stocks doesn't expect Coates to play, but then again, she might -- let's ask this: Did the trade have anything to do with Coates?

"No, that was not the motivating catalyst behind the trade," Stocks said. "However, if Alaina is in playing form, then we will absolutely be excited about using her."

So make of that what you will. Regardless of Coates' status, it's reasonable that the Sky weren't necessarily expecting this to be a great year. Chicago made the WNBA semifinals last year, losing to Los Angeles, and then coach Pokey Chatman was let go. Delle Donne wanted to be in Washington and forced a trade there.

A franchise that was once built around center Sylvia Fowles, then both Fowles and Delle Donne, then just Delle Donne, now has neither.

Stocks, in her first year with the Sky, had a lot of moving parts with which to work, including the season-long loss of Jamierra Faulkner to an ACL injury and the overseas absence of fellow guard Courtney Vandersloot when she was with the Hungarian national team. Vandersloot's return stabilized the Sky, but Stocks said that consistency has been elusive.

"Every team strives for it," she said. "The first season together poses some inherent challenges, as well as embracing new roles on the court."

Guard Allie Quigley, who showed off her specialty in winning the 3-point contest at the All-Star Game, has had the best season of her career, averaging a team-high 17.1 points. Dolson, who also came to the Sky in the Delle Donne trade, is second on the team at 14.2 points, and has been -- much the way she was at UConn -- a facilitator at center whom the offense often runs through.

Veteran guard Cappie Pondexter handled the point-guard responsibilities when she had to, and she's at 10.9 points. Jessica Breland has stretched herself between the power-forward and small-forward roles, and leads the team in rebounding at 6.5 per game, while also averaging 9.5 points.

There is a foundation of players who understand how to work together. But they need more impact pieces.

And while Monday's trade probably doesn't do much to help this year, you can see a 2018 plan of implementing a lot of youthful talent with the likes of Coates and the draft picks, guided by one of the indisputably best point guards in the league in Vandersloot.

The Sky will also be in a new location next year, playing at Wintrust Arena in the South Loop area of Chicago. Not everyone is thrilled with that -- especially the northern suburbanite fans who found AllState Arena in Rosemont much easier to get to and from -- but the Sky players are focusing on the bright side of it: a brand-new facility and a chance to perhaps engage more fans.

None of this is to say that Stocks or the Sky players are just tossing away the rest of this season. They have to keep grinding through this, and that is where having someone like Quigley, who has fought so hard just to earn her place in the WNBA, really helps.