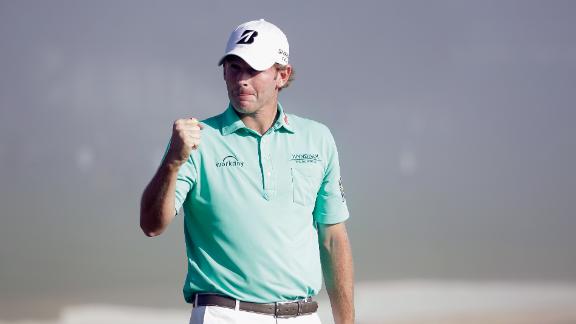 PEBBLE BEACH, Calif. -- Coming off the worst season of his career, Brandt Snedeker's mission was to become relevant again. He was eligible for only one major and none of the World Golf Championships, and he hated the idea of the world's best players competing without him.

That's what made Sunday at Pebble Beach so sweet. The view walking up the 18th fairway was spectacular for so many reasons.

Snedeker polished off a week that was close to perfect on the Monterey Peninsula by closing with 5-under 67 for a 3-shot victory over Nick Watney. With only one bogey all week -- yes, that still gnaws at him -- Snedeker broke his own scoring record in the AT&T Pebble Beach National Pro-Am.

"It was an emotional win for me today because it's been a long time coming," Snedeker said. "The last year and a half has not been up to my standard."

Once he took the lead for good on the par-5 sixth hole after Watney's worst swing of the week -- a 4-iron into Stillwater Cove -- Snedeker pulled away by leaving the mistakes to everyone else. He finished at 22-under 265, breaking by two shots the record he set two years ago at Pebble Beach, and by two shots the winning score under par held by Phil Mickelson (2007) and Mark O'Meara (1997).

It was the seventh win of his career, his second title in three years at Pebble Beach, and the timing could not have been better for Snedeker.

He's back in the Masters.

The victory moved him to No. 31 in the world, which should put him in all the WGC events, starting with Doral in three weeks.

"It's nice to be back in those tournaments," Snedeker said. "I can set my schedule a little bit. And all the hard work I've done the last year is paying off now. I know this is a great week, but I look forward to parlaying this week into more weeks coming up and keep this momentum going."

Snedeker decided last June to work with Butch Harmon to get a better understanding of his swing, and it took time for it all to sink in. Worse yet, he lost his putting touch toward the latter part of the summer months. Now, he looks like the Snedeker of old, walking briskly up to putts, looking at the hole as he takes five short practice strokes and then gets over the ball and gives it a pop.

He didn't have any three-putts all week, not an easy feat on poa annua greens with 156 players and their amateur partners.

Watney opened with four straight birdies, but three bogeys in a five-hole stretch at the turn cost him. He rallied with a pair of birdies for a 69 to secure second place alone, a good step for him getting his game back in order.

Charlie Beljan closed with a 66 and finished third.

Jim Furyk, the 54-hole leader, didn't make his first birdie until the 11th hole. He missed three birdie putts inside 10 feet on the front nine, went out in 38 and was out of the hunt halfway through the final round. It was the ninth time Furyk failed to convert when he had at least a share of the 54-hole lead since his last victory at the 2010 Tour Championship. Then again, this was his first competition in five months.

"I only made two birdies today and I hit the ball way better than that," Furyk said.

He tied for seventh, six shots behind, along with Jordan Spieth and Matt Jones.

With a big crowd celebrating one of the most beautiful weeks ever at Pebble, the final round quickly turned into a battle between Snedeker and Watney.

Watney, thrilled at the chance to play withSan Francisco Giants catcher Buster Posey, opened with four straight birdies to build a 2-shot lead. But on the par-3 fifth, a photographer shot hiscamera at the top of Watney's swing and he flinched, coming up well short and in a bunker. Watney made bogey, and Snedeker rolled in a 15-foot birdie putt for a 2-shot swing to tie for the lead.

"I thought Brandt handled himself really, really well," Watney said. "Maybe in trouble one time, but very solid. So that's what I need to be like next time."

Torrey Pines winner Jason Day, who opened with a 72 at Pebble Beach in great scoring conditions, got within 2 shots of the lead until the putts stopped falling. He closed with a 67 and tied for fourth with Pat Perez (68) and Dustin Johnson, who closed with a 66. It was the second tournament for Johnson since he returned from a six-month leave of absence for what he described only as a personal challenge.

Perez and Michael Lund, the co-founder of Pandora Jewelry, won the pro-am competition at 42 under.