Sources: Zach LaVine's deal with Adidas could be worth $35 million 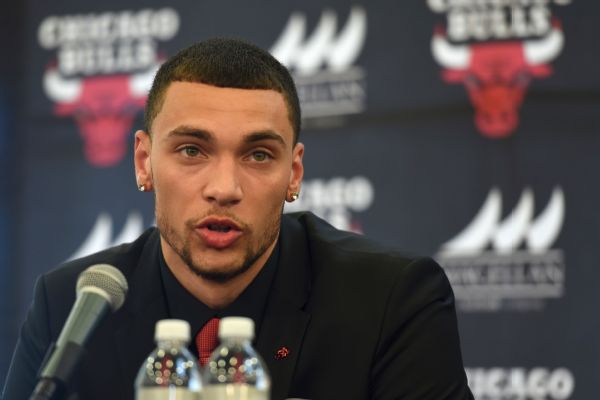 After receiving strong interest from several footwear brands, Chicago Bulls guard Zach LaVine has agreed to terms with Adidas on a four-year endorsement deal that could be worth as much as $35 million, industry sources told ESPN on Thursday.

LaVine, 22, has yet to play this season as he recovers from a torn left ACL suffered in February but hopes to be the future face of both the Bulls franchise and the Adidas brand.

"I was looking for a partner that would grow with me as my career continues to unfold," LaVine said to ESPN. "Adidas convinced me that I have a chance to legitimately become a face of the brand."

The former 13th pick of the 2014 draft had worn Nike throughout his first three seasons in the league, with Nike retaining a "match clause" over any potential offer sheet from a competing brand this fall. After reviewing the offer this week, Nike officially waived the clause, according to sources, finalizing LaVine's agreement with Adidas.

Adidas currently features James Harden, Damian Lillard and Derrick Rose as guards with a signature sneaker, and Kristaps Porzingis and Joel Embiid serving as cornerstones at the center position. With Minnesota Timberwolves forward Andrew Wiggins' Adidas contract set to expire next fall, amid some internal uncertainty of his long-term marketing potential, and emerging players like Brandon Ingram, Jaylen Brown andKelly Oubre Jr.. still developing, there's an open lane for a wing scorer to step in and elevate their profile with the brand.

The deal is also structured in a way to reward LaVine, a two-time Slam Dunk Contest champion who averaged 18.9 points last season with the Timberwolves, should he break out as an All-Star level player once he returns from the injury.

"It's a different contract than anything we've done recently," a brand source said.

By locking in the lucrative four-year deal now, negotiated by Nima Namakian of BDA Sports, LaVine is also set to enter sneaker free agency again at age 26, just as he's entering the prime of his career and the Bulls have also potentially improved as a rebuilding team.

"Adidas made a strong commitment, coupled with significant upside and flexibility," Namakian said. "Equally as important, their vision and belief in Zach becoming an icon athlete and foundational figure of the brand over time really resonated with him."

The deal continues Adidas' shift in its strategy of signing NBA players. With its official league partnership expiring earlier this year and no longer manufacturing uniforms for all 30 NBA teams, the brand will focus on younger players with All-Star level potential, versus signing a sea of players simply for sheer visibility.

LaVine said he was drawn to Adidas for its "brand presence already in Chicago" -- former Bull and MVP Derrick Rose has a deal with the brand -- and a focus on its lifestyle line.

"The direction the company is going in from a branding perspective has been impressive," LaVine said. "In recent years, they've been innovative and creative with both their marketing strategies and products. The way they positioned themselves and explained to me that I'd lead their next wave of players was huge."
Report a correction or typo
Related topics:
sportsespnandrew wigginsendorsementjames hardenjoel embiidnikeadidasjaylen brownaclnbakelly oubre jrkristaps porzingisbda sportszach lavinedamian lillardbrandon ingramchicago bullsinjuryderrick rosenima namakianshoe
Copyright © 2020 ESPN Internet Ventures. All rights reserved.
More Videos
From CNN Newsource affiliates
TOP STORIES