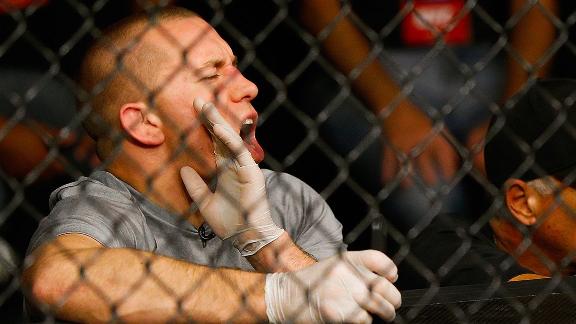 However, he will do so only if the UFC adopts a third-party drug-testing program.

"That's a very big factor for me [to come back]," St-Pierre said. "I'm wealthy and I'm happy. I retired on top. I don't need to risk taking a fight again. Maybe I would get someone who is cheating.

"If I fight again, I want a fair fight. I want it to be legit. Right now, the system is not in place for that."

The MMA world was rocked last week when the Nevada State Athletic Commission revealed that former UFC middleweight champion Anderson Silva had tested positive for multiple steroids before a nontitle bout against Nick Diaz at UFC 183 on Jan. 31 in Las Vegas.

Silva, who has denied taking PEDs, submitted the failed test on Jan. 9. The NSAC says it did not receive those results until Feb. 3, which is why Silva still fought.

The situation highlights some of St-Pierre's misgivings about drug-testing procedures in combat sports. Since vacating his UFC title in late 2013, St-Pierre has advocated for independent, third-party drug testing in MMA.

"I don't like to see fighters test positive," St-Pierre said. "I'm not happy to see Anderson test positive. It doesn't elevate me to see someone else downgraded. If we would do third-party tests, it would scare the steroid users and it would change the face of the sport. Trust me. Entire rankings would change. Whether people want to believe it or not, it's a huge problem."

Currently, the responsibility of drug testing falls to athletic commissions that do not have experience with Olympic-style, year-round blood testing. Nevada is one of very few jurisdictions to conduct anything but standard fight-night urine tests -- and started doing so regularly only in 2014.

Additionally, commissions are financially tied to big events. In Nevada for instance, the NSAC collects 6 percent of gross ticket sales.

St-Pierre does not accuse any commission of being corrupt, but because they all directly benefit from hosting a major fight, he says the possibility exists.

"We know athletic commissions have a financial interest in big events," St-Pierre said. "It is not in their best interest to ever cancel an event."

The more pressing issue for St-Pierre, though, is whether these commissions are competent enough in drug-testing procedures.

Before his fight against Johny Hendricks, St-Pierre campaigned for random, Olympic-style testing. He offered to pay for both him and Hendricks to undergo such testing, conducted by Voluntary Anti-Doping Association (VADA).

An agreement was never reached, and St-Pierre ultimately underwent the VADA program solo.

The NSAC has made efforts to conduct its own random testing during fighters' camps with an enhanced program, which it implemented on approximately one fight per UFC card in 2014. The program busted several high-profile athletes in 2014 and was paid for by the UFC.

The commission, however, has fumbled the process on several occasions. In Silva's case, had the NSAC sent a request to its lab to expedite the prefight results, it likely would have had them in time to stop Silva from competing at UFC 183.

St-Pierre has said there is a vast difference in protocols between the NSAC and an independent agency like VADA.

"I've never been tested by an athletic commission as good as I was tested by VADA," St-Pierre said. "The commissions, it's not their expertise. One time, [an NSAC collector] came in with his fingers in [my sample cup]. I don't know this guy. Maybe he just did cocaine and now it's in my sample. I don't think so, but I don't know."

Last year, the UFC announced it would create the kind of third-party testing program St-Pierre has publicly called for, with the aim to randomly test all of its contracted fighters. Several independent agencies submitted proposals to partner with the UFC in such an effort.

UFC CEO Lorenzo Fertitta told ESPN.com last month, however, that a comprehensive program is not imminent at this time, mostly because of regulatory issues.

"We're still trying to figure it out," Fertitta said. "It's not as easy as rolling out a full-blown program. You have to sit down and ask, 'How does it relate back to commissions? Will other commissions recognize the potential fines and suspensions we lay down?'

"It's fairly complicated, but we're committed to making sure there is drug testing and it is a clean sport.

St-Pierre believes the UFC is obligated to such a program as the industry leader. He said if another promotion, such as Bellator MMA, beats UFC to it, it could diminish the UFC's position in the market.

"If I were in charge, I would take the money and use it for this. They have money. These guys are pretty wealthy people. I'm sure they can afford it."

If and when a year-round program is established, St-Pierre says he will consider stepping into the Octagon again.

"If the UFC makes the testing by a third party who is independent, with no financial interest and it competent, I will think twice about it," St-Pierre said. "I won't say I will do it, but I would let it play out more in my mind."