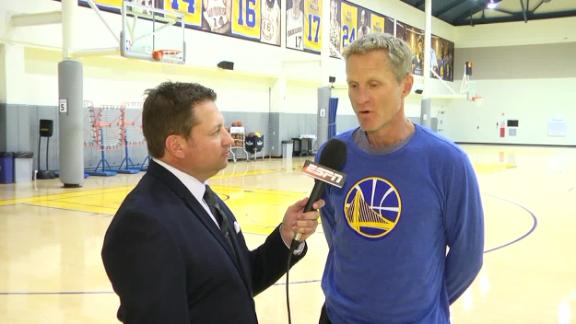 OAKLAND, Calif. -- Star guard Stephen Curry remains questionable for Game 2 of the Golden State Warriors' playoff series against the Houston Rockets on Monday, after rolling his right ankle in the second quarter of Game 1.

Though Curry was present for his team's practice on Sunday, he got treatment on the ankle rather than participate. Curry arrived at the practice facility with no visible limp, but did not shoot after practice, as is his usual routine.

"He's doing a little better than yesterday. Again, he'll get treatment today, get some rest, get off his feet, and do the same thing tomorrow at shootaround and see how he's feeling."

On how the Warriors might adjust, Kerr quipped, "Kind of changes things. We don't seem to be as good of a coaching staff when Steph goes out. I don't know why.

"Steph missed three or four games this year. We did fine. We've got to find different ways to score, but we'll prepare for that and see what happens."

When asked whether he expects Curry to play, Warriors center Andrew Bogut said, "I'm not sure at this point. He's still banged up, still rehabbing yesterday. You know Steph's competitive and wants to play every game he can, but I think we're in a position where we'll probably be smart, as Coach Kerr said."

If the Warriors do rest Curry for Game 2, it will provide him an extended layoff. Game 3 in Houston is on Thursday.

"We always factor [the schedule] in," Kerr said. "One way to look at it is if we don't play him, that's ... four [days] in between. Again, we'll reassess tomorrow."