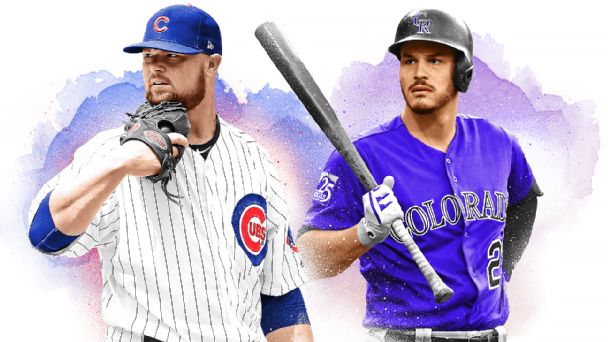 The unprecedented schedule in baseball on Monday, with two tiebreakers, makes this feel like a consolation game, but it shouldn't be -- and it isn't. The Chicago Cubs belong in the playoffs with 95 victories and a run differential of +116. The Rockies played extremely well down the stretch and caught and passed the Los Angeles Dodgers, but Colorado lost in the tiebreaker game on the road.

So now the Cubs and Rockies play in the National League wild-card game.

Only this time, the loser goes home.

Three reasons the Cubs will win

1. Jon Lester.He is one of the best big-game pitchers in the sport. This will be his 22nd postseason start; he has a 9-7 record and a 2.55 ERA, with 113 hits allowed in 148 innings. He pitched a World Series clincher in 2007 against the Rockies. He pitched in relief in Game 7 of the 2016 World Series, which the Cubs won. Lester faced the Rockies once this year, and he threw 5 scoreless innings. He enters this start having thrown very well in September, with a 4-1 record and five earned runs allowed in 29 innings. "This game is what Jon was built to do,'' said Cubs manager Joe Maddon. "We always feel great with him out there.'' The Rockies will start Kyle Freeland, who has been brilliant this season -- a season that would have been good enough to win the Cy Young Award in several other years. But he has never pitched a postseason game. He is pitching on short rest. A one-game series often comes down to the starting pitcher, and a rested, experienced Lester has a slight edge.

2.The Cubs are at home, which always matters this time of year.The Cubs are 51-31 at Wrigley Field, and they didn't have to travel after playing at home on Monday. The Rockies were 44-38 on the road, and they had to fly from L.A. Wrigley was rocking for Monday's tiebreaker game, and even though the Cubs lost to the Brewers, the Cubs and their fans are going to be ready for this one. Otherwise, after leading the division by five games in early September, the Cubs will be out of the postseason after only one game.

3.Offense.At some point, it seems, the Cubs are going to hit. After averaging 5.1 runs per game in the season's first half, they averaged 4.1 runs per game in the second half. Thirty-nine times this year they scored fewer than two runs; only the Orioles had more such games. But Anthony Rizzo, who homered for the only run in the tiebreaker game, had a terrific second half. Kris Bryant has adjusted his hitting style recently, keeping two hands on the bat through his swing, to put less stress on that sore shoulder. He had some very good at-bats over the weekend against the Cardinals. And catcher Willson Contreras, who hit ninth in the tiebreaker game, "has had some swings lately,'' said Maddon, "that look like the second half of last year [when Contreras raked].'' The Cubs have averaged 6.5 runs in their victories this season and 2.1 runs in their losses; they might not have to get too many runs for Lester.

One reason I will be completely wrong

The Rockies have won nine of their past 11 games.When Nolan Arenado and Trevor Story are swinging well, as they have been lately, they are a very dangerous team. And now Charlie Blackmon has started to swing the bat better than perhaps he has all season. Plus, the Cubs appear tired. They have played a game in 41 of the past 42 days; and on that lone off day, they arrived in Chicago from Phoenix at 6 a.m., and "we were all french-fried for the rest of the day,'' Maddon said. If the Rockies can get into the Cubs' bullpen, as the Brewers did Monday, Colorado can win this game. For the Cubs, not having the injured Brandon Morrow really shows withPedro Stropan uncertainty in his first game back from a hamstring injury, ever-reliable Steve Cishek having pitched in five of the past six days, and Carl Edwards Jr. off the roster for Tuesday's matchup.
Report a correction or typo
Related topics:
sportsespnpostseasonmlbnl wild card gamewild card gamewild cardkyle freelandjon lesternational league wild card gamenational leaguecolorado rockiesnlwcchicago cubsplayoffs
Copyright © 2022 ESPN Internet Ventures. All rights reserved.
TOP STORIES
Hairstylist killed while looking for parking at work in Chicago Lawn
Girl killed in Milwaukee shooting ID'd
38 shot, 5 fatally, in Chicago weekend violence
Pressure growing for safe places to inject drugs in Chicago
Tonga volcano eruption shock waves detected in Chicago
Chicago single-use foodware ordinance for restaurants takes effect
Cold case team shines new light on betrayal of Anne Frank
Show More
$3M bail for man wounded, charged in shootout with Cook Co. deputies
Microsoft buying Activision Blizzard in $68.7 billion deal
5G launch could wreak havoc on airplanes, airline CEOs warn
Cook County brings back 3 mass COVID vaccination sites
Fire at Kenosha apartment complex for seniors leaves 2 dead, 5 hurt
More TOP STORIES News