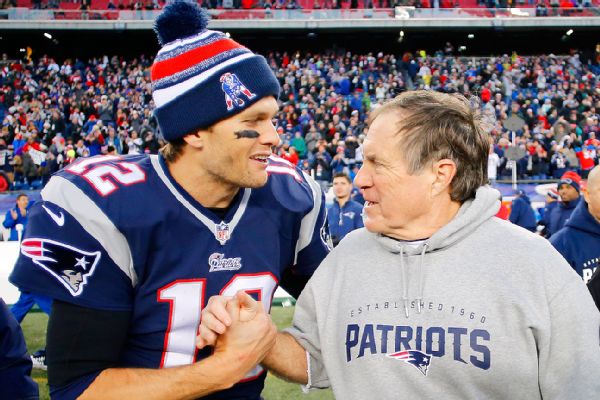 ESPN
A season that began with quarterbackTom Brady serving a four-game suspension will end with him making his record seventh Super Bowl appearance when his New England Patriotstake on quarterbackMatt Ryan and the Atlanta Falcons.

Brady and coach Bill Belichick, whose seventh appearance is also a record for a head coach, will be seeking their -- and the Patriots' -- fifth Lombardi Trophy and second in three years. This will be the franchise's league-record ninth appearance in the Super Bowl. The Patriots are 4-2 in their previous six Super Bowl appearances in the Belichick/Brady era.

What it means to play in seven Super Bowls?

"It's pretty crazy to think about it," Brady said early Monday morning during his weekly interview on sports radio WEEI. "I've just played on so many great teams, with so many great coaches over the years. It's just been a great ride. It's been fun this year. It's had its challenges but to be in this position like we are and just to share the experience of the season with my teammates and see what we've accomplished together is pretty special."

Asked if this Super Bowl berth is particularly sweet because the year started with Brady serving a four-game suspension, Belichick said, "No, every year has its own challenges. Whatever they are, they are. Every team faces them. Every team has to deal with them. It's a special year because it's a special team and it's a special group in the way they've worked together."

Brady improved to 5-0 at home against Pittsburgh in helping the Patriots paste the Steelers 36-17 in New England's seventh consecutive AFC Championship Game. He completed 32 of 42 passes for a franchise playoff-best 384 yards and three touchdowns Sunday, picking apart Pittsburgh's defense and often hitting wide-open receivers who found plenty of room to move in Pittsburgh's zone defense.

"It hasn't sunk in yet," Brady said Sunday. "Every week it's kind of been one day at a time and one game at a time. I haven't even said those words yet. Well, I said them after the game, but not at all this week or now. It's unbelievable. It's unbelievable.

"It's been a long journey, but I've worked really hard to get to this point,'' the product of Monmouth said. "I couldn't be happier to get to be a part of this thing, this team, this whole thing.''

Hogan's second touchdown came on a flea-flicker, and he easily beat safety Mike Mitchell to the corner of the end zone. At that point, Hogan had seven catches for 117 yards and the first multi-touchdown game of his four-year career.

Brady is 4-0 against Atlanta, having completed 67 percent of his passes for 1,193 yards and nine touchdowns with just one interception.

Since Brady's Week 5 return from his suspension for his role in the Deflategate scandal, New England's only defeat came at home to Seattle, and Brady, 39, had one of the best seasons of his Hall of Fame-caliber career.

Information from ESPN's Mike Reiss and The Associated Press was used in this report.