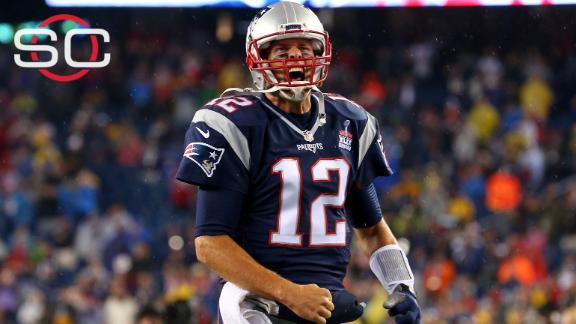 ESPN
By Darren Rovell
Despite an offseason filled with Deflategate controversy, New England Patriots quarterback Tom Brady continues to be the best-selling player in the league.

Through the first two weeks of the season, Brady's No. 12 sits at the top of the list of best-selling jerseys on the league's official website.

Brady also was the best-selling player among all licensed merchandise from March 1 to May 31, according to a list revealed by the NFL Players Association.

That Brady is No. 1 is impressive given that the team's jersey hasn't changed since Brady entered the league. The Patriots' last main jersey change came in 2000, other than the switch of manufacturers from Reebok to Nike and a font change on the logo below the neck this year.

And it's not just jerseys.

On Sept. 10, Under Armour started selling the black shirt worn by Brady in its new commercial. The shirt has the number 199 in black, which is the number of the overall pick that Brady was selected with in the 2000 NFL draft. The shirt sold out in hours and the company, which Brady endorses, is now taking preorders for the next batch.

The Patriots have three players (Julian Edelman is No. 16) in the top 25, as do the Seattle Seahawks (Russell Wilson, Marshawn Lynch, 12th Fan) and the San Francisco 49ers (Hayne, Colin Kaepernick and NaVorro Bowman).

Tom Brady tops NFL jersey sales
ESPN sports business reporter Darren Rovell breaks down the most popular jerseys in the NFL through the first two weeks of the regular season.