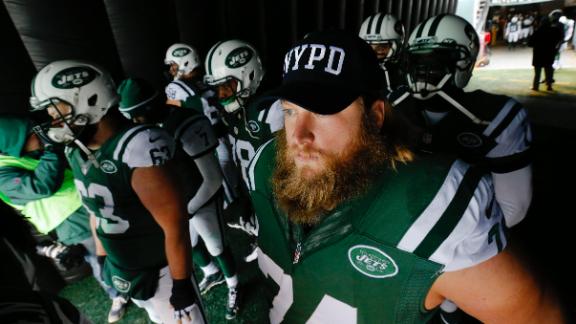 ST. LOUIS -- New York Giants coach Tom Coughlin wore a black strip on his left shoulder and a peace sign under the "NY" logo on his blue pullover for the Giants' game against the Rams on Sunday.

The Giants said it was a tribute to the two NYPD officers, Rafael Ramos and Wenjian Liu, who were shot and killed while sitting in their car in Brooklyn on Saturday afternoon.

Coughlin grew emotional after the game when explaining the black bar on his left shoulder and the peace sign medallion on his shirt. He opened his postgame news conference with an explanation and had to stop several times during his remarks as he was obviously struggling with his emotions.

"The New York Giants wanted to honor and mourn the assassination of the two New York City policemen that took place last night," he said. "Let's let the voice of reason prevail. Violence never solved anything. I realize there are issues, but solve them with non-violent means."

Coughlin has been a consistent and outspoken supporter throughout the years of law enforcement and the military.

The Giants said Coughlin was the only member of the staff wearing the tribute.

Two officers from the 78th precinct that serve Barclays Center were on the floor with the color guard during the Nets' moment of silence.An NYPD hat will be displayed in front of the scorer's table for the duration of the game.

"Those two officers, it's a shame. That's tough," Mangold said. "Those guys, they do a great job. I've been here nine years. Every one of those guys that's out there, that risks their lives every day, to go out there and keep the community safe, protect the community -- for that to happen, for those two guys, for their families, that's a raw deal. If wearing that hat gives a little bit of comfort or shows support for those folks, I'm happy to do it."

TheNew York Yankees'Yankee Silver Shield Foundation said it will pay for the college education of Ramos' son, 13-year-old Jaden, aswell as another son who is already in college, according to the New York Daily News. Liu did not have children.

ESPNNewYork.com's Kieran Darcy and Mike Mazzeo contributed to this report.