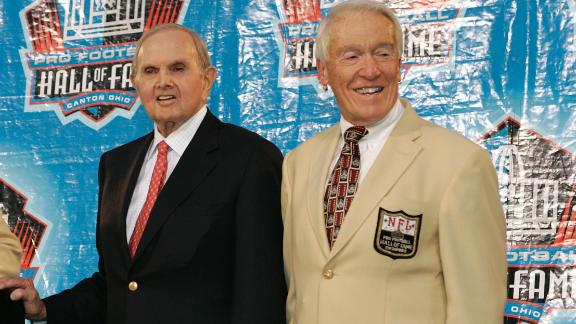 The Hall of Fame defensive end pulled out a photo taken the day he signed his rookie contract in 1985. The picture showed Wilson with his hands across his face as if he were praying.

"He has that worried look on his face, like, 'Lord knows, I hope I'm not wasting this draft pick on this chubby kid from Norfolk, Va.," Smith said, laughing. "I thought it would be befitting I brought this, and showed some of the players. And they got a big laugh out of it."

"That," said Smith, who became the NFL's career leader in sacks, "is one of my special memories."

There were many during a public remembrance celebrating the 95-year-old Hall of Fame owner's life.

With Frank Sinatra -- Wilson's favorite -- playing over the loudspeakers, and an array of photos, trophies and souvenirs spread throughout the team's practice facility, former and current players, employees and thousands of fans paid their respects to the team's founder, who died at his home in Grosse Pointe Shores, Mich., on March 25.

"The Bills are more than just a football team. They're family," said Matt Guarino, a 20-year season-ticket holder. "So we came to pay our respects just like we would any friend and any family member."

The remembrance took place a week after a private funeral service was held in Detroit.

The mood on Saturday was festive. Under grey cloudy skies and with a cold brisk wind blowing off nearby Lake Erie, a long line of fans snaked into the parking lot once the doors opened. Many wore team jerseys and posed for pictures in front of the Wilson memorabilia.

The displays circled the fieldhouse, and featured many significant moments of Wilson's life: From childhood pictures to the medals he earned serving in the Navy during World War II, and photos of Wilson with his fellow American Football League founding owners. There was a painting of Wilson watching the Bills' 1993 Super Bowl loss.

The franchise's two AFL championship trophies were displayed, as was Wilson's Pro Football Hall of Fame bust and gold jacket.

In the middle of the field, the Bills recreated the layout of Wilson's office. There was a team helmet on the coffee table, press releases on his desk, as well as a picture of him and his wife Mary.

And Mary Wilson was on hand. Standing near a guestbook area, she greeted fans, shared stories, signed autographs and posed for pictures.

"He was a great sportsman," Wilson told one fan. "He loved competition. And that's why we got along so well. I was like that, too."

In a statement released by the team, she thanked people "for their tremendous outpouring of love for Ralph."

"Before he passed, he told me that he wanted people to celebrate his life after he was gone. He wasn't big on tears," she said. "Ralph most likely would have offered a funny quip about today's event. But at the same time, he would have been profoundly touched by the fans' outpouring of emotion."

Mary Wilson has taken over as the Bills' controlling owner, a role she will maintain until the franchise is sold. Ralph Wilson expressed no interest of leaving the team to his surviving family members. The sale could take place within a year, opening the possibility the Bills could relocate.

"Keeping this team here meant a lot to me," said Rich Izydorczak, who's had season tickets for 41 years. "And I hope it stays this way for a long time to come."

Kathleen Hubbard, a Bills cheerleader in the early 1970s, brought a picture of Wilson posing with her and other cheerleaders on the field.

A business not far from the stadium flashed the message, "You will be missed Ralph Wilson Jr.," on its electronic sign.

Former Bills tight end Kevin Everett, in Buffalo for another event, made sure to show up to honor Wilson.

Everett has recovered since being nearly paralyzed after sustaining a severe neck injury during the 2007 season opener. Part of his recovery was aided by the Miami Project to Cure Paralysis, a foundation which Wilson supported with a $1 million donation before Everett was hurt.

"I thank God for his work that everything paid off to help benefit one of his players," Everett said. "He has a big heart. I thank God for what he did."

Levy On Wilson: A Great Loss For Everyone
Former Bills coach Marv Levy discusses the life and career of longtime Bills owner Ralph Wilson, who died at age 95.

Berman Remembers Ralph Wilson Jr.
Chris Berman reflects on the life of Bills owner and Pro Football Hall of Famer Ralph Wilson, who died at the age of 95.