What would it take for the Cubs to pull off a deGrom blockbuster? 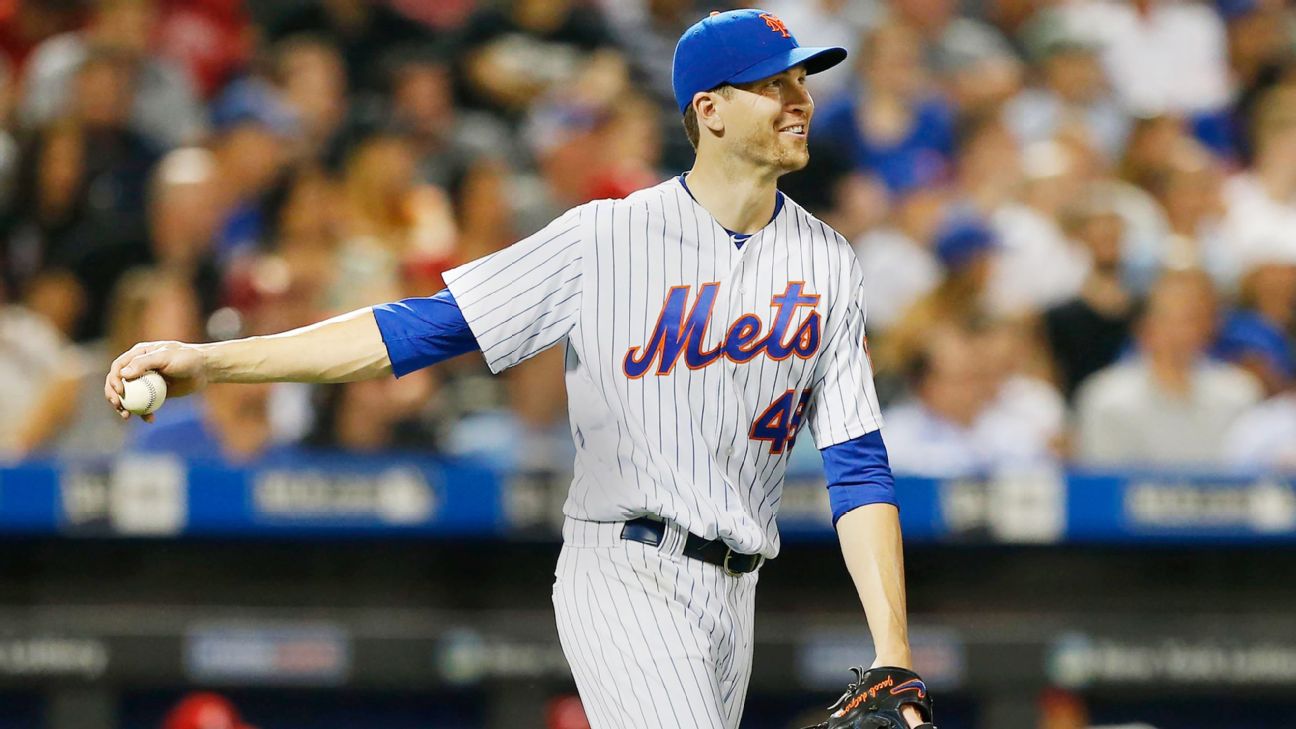 CHICAGO -- It's a dilemma every general manager grapples with at one time or another: Do you make a trade from a strength to shore up a weakness while hoping and praying that moving those parts doesn't create a new hole to fill?

If the Chicago Cubs are at all interested in New York Mets pitcher Jacob deGrom -- and if the Mets take deGrom to the market in the next two weeks -- Chicago's front office will be facing that dilemma head-on.

The Mets would more likely be looking to retool in the majors than completely tear down with a rebuild, which could make the Cubs a good fit -- if New York decides to field offers for its All-Star ace. In a classic deal of four to five prospects for a veteran star, Chicago would have trouble competing with fellow contenders such as the Milwaukee Brewers or Philadelphia Phillies. But if starting major league players is the asking price, the Cubs have plenty of those.

Cubs manager Joe Maddon uses a rotation of nine position players for seven spots, not including his catchers. A couple of those players could be expendable. A survey of major league baseball scouts, front-office executives (not associated with the Mets or Cubs) and media members zeroed in on a trio of Cubs who could be the centerpiece of a larger deal with the Mets: shortstop Addison Russell, infielder/outfielder Ian Happ and pitcher Mike Montgomery.

"Two of those three could start to get it done," one National League scout said.

What if the asking price were all three? Several surveyed said that would be too much for the Cubs to give up, so they would have to sweeten the pot as best they could from a minor league system that isn't as stocked as some other potential suitors'.

Montgomery would fill at least a back-of-the-rotation spot, as most teams that trade a high-caliber pitcher are looking for at least one arm in return, but he'd more likely fit as a supplemental part of a deal than as the primary piece.

The Mets have Amed Rosario at shortstop, so it is harder to see Russell as their main target -- though he can play second -- but his upside is undeniable. Happ has re-established himself as an intriguing player, and he could be the main target in a blockbuster deal. Despite a rough start at the plate -- and in the field -- his OPS is .832, which includes a .379 OBP. He can play any outfield position as well as first, second and third.

"Happ is the guy scouts like," one executive said. "He's a switch-hitter with athleticism. No one knows what he'll be, but he can start now on a lot of teams."

That means to get a deal done, a trade offer would most likely need to include either Happ or Russell along with Montgomery and a couple of the Cubs' top prospects. If they were willing to part with both Happ and Russell, they might be able to get away with including only one prospect in the trade. An ace isn't going to come any cheaper than that.

Would deGrom be worth ripping apart the Cubs' successful lineup while potentially subtracting more from their farm system? With uncertainty about Yu Darvish and inconsistent first-half performances from every starter not named Jon Lester, deGrom could be a huge piece for the Cubs' September and October puzzle this year -- and beyond. But that wouldn't make trading for him a no-brainer.

"We've shown that we're really loyal to this core group for a reason," Cubs general manager Jed Hoyer said before the All-Star break. "They've earned that loyalty over 3 seasons. Our focus is on supplementing that group."

At the same time, Hoyer indicated that the Cubs have to take "all information" they can gather and use it before the July 31 trade deadline.

There is no timetable for Darvish's return from the disabled list, and No. 5 starter Tyler Chatwood has shown few signs of slowing his record pace of free passes. Kyle Hendricks and Jose Quintana have been up and down as well. Although the Cubs have spent money and assets on these pitchers in the past 12 months, it doesn't change the reality of the situation, according to team president Theo Epstein.

"You can't let the path you took to get to a certain point hinder your ability to take a calm, rational look at where you are and what you might need, even if it's in the short-term," Epstein told the Cubs' flagship radio station, WSCR-AM, on Wednesday.

In other words: The fact that the Cubs have spent so much time and energy on their rotation doesn't preclude them from spending more.

Right now, the rotation is the weak link of the team. The offense is rolling, and the bullpen is performing up to expectations. The player the Cubs brought in most recently with hopes of making that rotation a strength could be the key ingredient. If the Cubs knew with certainty that Darvish would be returning at an elite level, then a deal for deGrom wouldn't make sense. But there is no way to know that.

The team claims it doesn't matter. It has its plans.

"No matter what happens, we're going to try and acquire pitching," Hoyer said.

What Hoyer didn't relay is whether the Cubs will seek a star-level addition to the pitching staff or whether simply adding depth will suffice.

"Every piece of information we can gather is helpful," Hoyer said. "No matter what happens, we know we're going to need more pitching to get through the season effectively."

The Cubs will take the field with a 2-game lead in the NL Central on Thursday night, but a quick look to the NL West -- where the Dodgers have spent their All-Star break finalizing a deal forManny Machado -- underlines that few first-place teams rest on their laurels.

Sure, the Cubs could probably get through the division with the roster they have, but could they beat a Machado-infused Dodgers team in October? And even if they did, they would need all the pitching they can muster to defeat any of the elite American League contenders in the World Series.

DeGrom would make the Cubs instantly better in an area of weakness, but would a trade weaken that dynamic offense too much? The Cubs need to be prepared to answer that question.