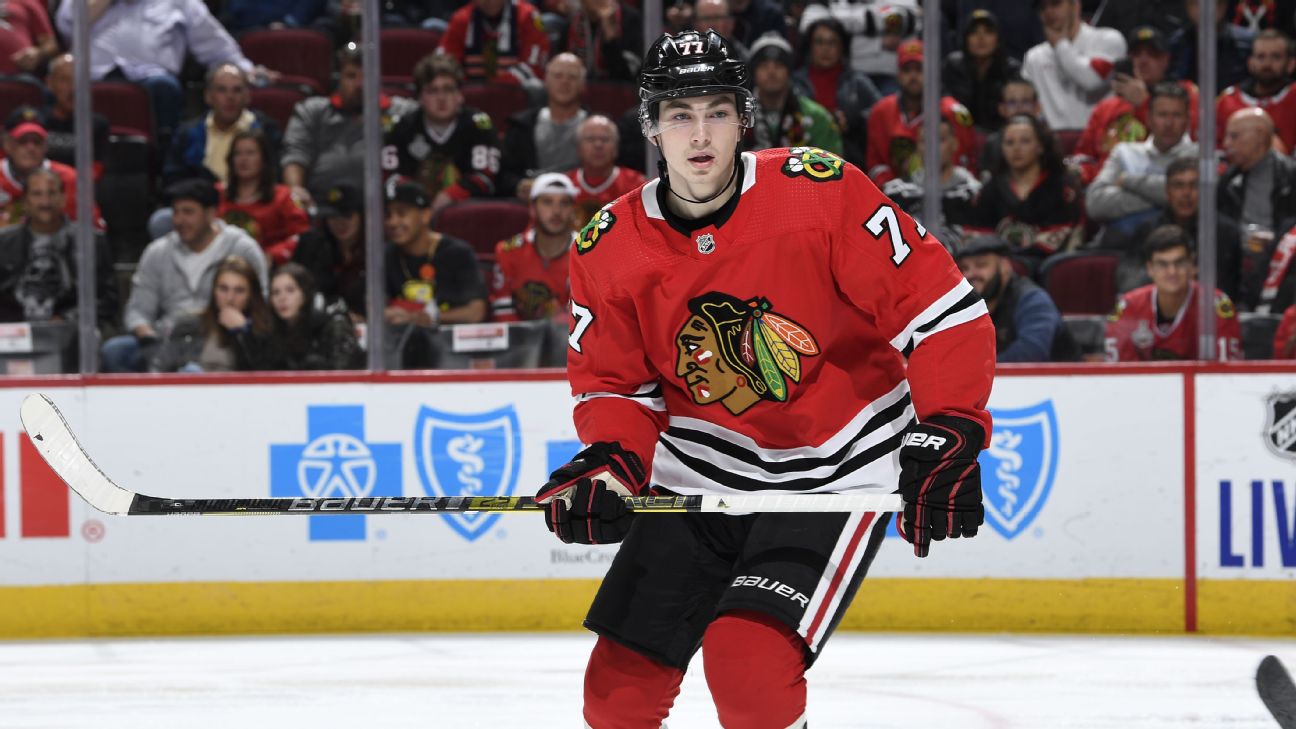 After the Chicago Blackhawks drafted Kirby Dach at No. 3 overall in June, the 18-year-old visited Chicago. Dach met a few of his future teammates, including veteran defenseman Brent Seabrook. Dach and Seabrook talked about growing up in Western Canada and transitioning to a new life in the NHL, and Chicago. As the season grew closer, Dach asked Seabrook something bold: "Can I live with you?"

Seabrook had to think about it. The 34-year-old already had a few roommates: his wife, Dayna, their three kids -- ages 2, 4 and 6 -- as well as three dogs. Seabrook asked Dach to come over for dinner a few times to make sure it was a good fit.

"He has a young family, so he didn't want me to feel like I was missing sleep, or it was too loud in the house or too chaotic," Dach said. "But I grew up with a chaotic family. I have two siblings of my own, a bunch of dogs. I'm used to the chaos. It feels like home."

And so it was arranged. Dach got a bedroom in the basement, with his own bathroom. He would bum rides to the rink with Seabrook (which is good, because Dach doesn't have a car) and eat dinner with the family ("I might have to start chipping in soon," Dach said. "I'm definitely eating a lot more than his little kids do.") Seabrook instituted one major rule: Dach would have to do his own laundry.

The teenager had no idea how long he would stay. Turns out, it's going to be for a while.

When Chicago's season didn't begin as well as anyone hoped, management turned to the kids to help save the day. Over lunch in Nashville late last month, general manager Stan Bowman and coach Jeremy Colliton told Dach he would stick around instead of returning to his junior team, the WHL's Saskatoon Blades. Dach is the first Blackhawks player since Patrick Kane in 2007 to stick in Chicago his first season.

Two days after the conversation with Dach, the Blackhawks made waves by calling up 19-year-old defenseman Adam Boqvist, the No. 8 overall pick of the 2018 draft.

Boqvist had impressed in training camp, but started the season in the AHL. Chicago had a surplus of defensemen to rotate in on the NHL roster, and while Boqvist had elite offensive skills, his defensive game needed seasoning.

"I don't know if I would have planned it that way, no," Bowman said of bringing on the top two prospects this early in the season. "I always try to leave some room for surprises."

Boqvist's call-up came after Chicago had lost five of six; it was shut out in two of those games, and scored just one goal in another two. The Blackhawks' defense wasn't projected to be great this season, but the offense was supposed to compensate.

"Our team really needed a little bit of a boost," Bowman said. "We weren't scoring. We were having trouble transitioning the puck. Our power play was struggling, and that's really right up [Boqvist's] alley. We said, I don't know if he's 'ready,' [but] I'm also not sure when he would be ready. So we decided, 'Let's just see where he's at.'"

As for the message it sends the rest of the team?

The Blackhawks, after all, are holding onto a core that won three Stanley Cups. The team fired legendary coach Joel Quenneville on Nov. 6 of last season and opted for the 34-year-old first-timer in Colliton, but otherwise has resisted going full-on rebuild.

"As players, we view it as the young guys are here to help the team win," Kane said. "That's what we need, especially nowadays, if we want to make a run for the playoffs. We're going to have to go on a pretty good run, so they're going to need to help us win games."

Added Alex DeBrincat, himself just 21: "Maybe it changes the message a little bit, but I do think they're going to help us win at this point now, too. As a team, we're not really thinking, 'Hey, we want to be good in the future.' We want to be good right now."

"I like that Dach tries to make plays," Kane said. "He's not a guy that just tries to push it ahead or chip it in every time he gets it. He can hang onto the puck, he can skate, and he wants to make plays out there."

Asked what he liked about Boqvist's game, DeBrincat said: "He has poise with the puck. Usually your first game or two you're throwing it away or something, so it's good to see him calm with the puck and know he can play at this level."

The Blackhawks can send Boqvist up and down through the minors as they please -- unlike Dach, who is not AHL-eligible due to CHL rules -- so the team hasn't made any long-term decisions on the defenseman yet. Boqvist played for the London Knights in the OHL last season, and Bowman knows the transition from a mostly weekend schedule in juniors to a hectic, 82-game NHL grind is often difficult on players.

"We probably won't play him every game, and that's OK," Bowman said. "But if it gets to the point where he's not playing at all, he's going to Rockford."

That came to pass this week, as Boqvist was sent back down to the AHL club again on Nov. 14.

Bowman reiterated that the message to the team is that the kids are here to help for now. "But maybe the bigger picture is, where they are going to be if they continue to develop -- how good could they be in February," Bowman said. "They're not a finished product. Exposing them to [the NHL] could give our team a boost knowing, 'Here's where they are today, imagine where they could be in a couple months.' Yeah, they're not going to be perfect every night, but as a player, you know that this guy can really be better in a couple months. I think that helps our team. If anything, I think it should bring excitement."

Dach and Boqvist -- as well as 21-year-old Alexander Nylander -- have become close, though Dach does gravitate to the veterans on the team as well. Dach finds himself seeking out conversation with veteran defenseman Duncan Keith as often as he can. "I really pay attention to how well he takes care of his body," Dach said. "It shows on the ice. I mean, the guy is 36 years old and he's playing 24 or 25 minutes a night and he looks like he could play more. Whatever he is doing, I want to do."

There's only one threshold to watch for now with Dach: whether he hits 40 games, which brings him one year closer to unrestricted free agency. As with Boqvist, the Blackhawks don't intend to play Dach every night. One of the biggest reasons: At 6-foot-4 and just 164 pounds, he can get pushed around, and needs to bulk up.

Dach was scratched at Pittsburgh recently for the first game of a back-to-backset. Instead of playing, he put in a tough weightlifting session.

"The hardest part for a player is to continue training your body during the season, because you are trying to maintain your strength," Bowman said. "For [Dach], we want him to continue to gain strength during the year. We do have to monitor his workload, how many games he plays."

It helps that Dach has been eating so much at Seabrook's house. Then again, the longer he stays, the more likely it is that he'll need to help pay for groceries.
Report a correction or typo
Related topics:
sportsespnchicago blackhawksblackhawksnhladam boqvistkirby dachpatrick kane
Copyright © 2020 ESPN Internet Ventures. All rights reserved.
More Videos
From CNN Newsource affiliates
TOP STORIES