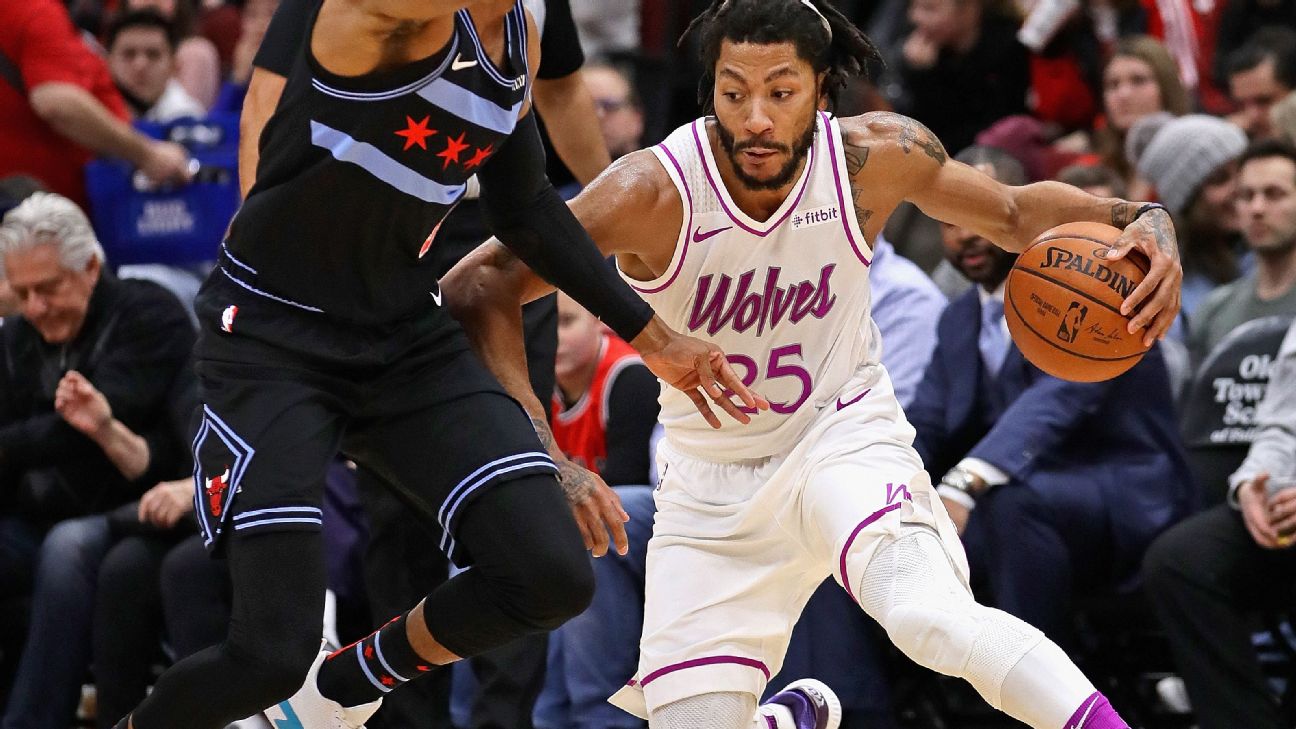 CHICAGO -- The first time Derrick Rose visited the United Center as a member of an opposing team, he was booed. It was Nov. 5, 2016, and fans jeered when he touched the ball and heckled him when his name was called during player introductions.

Wednesday night was a different story.

Rose, now with the Minnesota Timberwolves, returned to the United Center for the second time since being traded in June 2016. The sellout crowd roared with delight when Rose's name (introduced as "from Chicago," a tradition for players from the Second City) was announced in the starting lineup and cheered whenever he hit a shot. When Rose stepped up to the free throw line in the fourth quarter, the crowd chanted, "MVP, MVP."

"It made me reminisce about some of the old days," Rose said after the game while sporting a beanie with "Chicago Native" scrolled across the front. "With the year I'm having, it's very special to come back here and play."

Rose finished with a team-high 24 points, 8 assists and 3 rebounds in the Wolves' 119-94 rout of the Bulls. Rapper and Chicago native Chance the Rapper was in attendance, taking in the game from a courtside seat. Out of one timeout, Rose ran over and greeted the musician.

Rose said that at some points, the support he received from the crowd felt "overwhelming," and he could tell "the support is still here." When asked why he thought he was received differently this time, he said it's because he is "playing the Chicago way of basketball."

"It's gritty, it's grimy," Rose said. "It's one-on-one. It's doing whatever to get the win. It's not backing down, and I think that's what people love."

During Rose's seven years with the Bulls, he led the team to an Eastern Conference finals appearance and became the youngest player to win the league's Most Valuable Player award. In April 2012, Rose tore his left ACL. After that, he struggled to stay healthy, suffering two more knee injuries. The Bulls traded Rose to the Knicks and spent time playing for the Cavaliers before joining the Timberwolves.

"I always felt that if he got back to being healthy, he could be very productive," Wolves coach Tom Thibodeau said.

He has been able to turn around his playing career since joining the Timberwolves. He is averaging 18.5 points, 4.6 assists and 2.8 rebounds in 29.2 minutes of play per game.

"I'm just taking it all in," Rose said. "It feels like my rookie year, where I'm bringing everything -- of course with the knowledge I have and all the games I've played. Of course, it's not my rookie year. But if feels like a breath of fresh air."

In 2015, a woman accused Rose, then a member of the Bulls, and two of his friends of raping her in 2013, but the men were found not liable in an October 2016 civil trial. In November, a three-judge panel in California heard oral arguments to determine whether the woman should be granted a new civil trial.

After Wednesday's game, Rose lingered on the court to do radio and television interviews. When he retreated into the tunnel, remaining fans called after him: "You're the real MVP!" and "Welcome home, Derrick!"

The 50 friends, family members and even his former high school coach in attendance flooded the hallways, prompting security to disregard the rule that requires visitors to stay lined up near the family room. There were just too many people.

"The big thing with Derrick is that I think he's on his way again, and every story has a beginning, middle and an end," Thibodeau said. "And I think his end is going to be great."