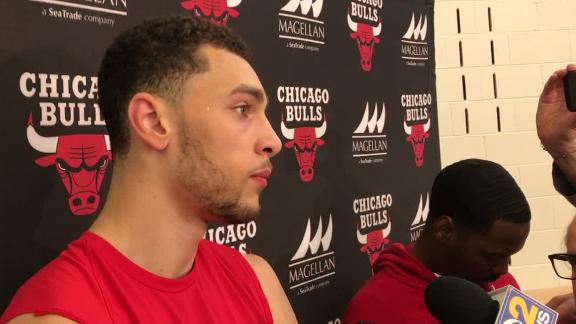 CHICAGO -- Bulls swingman Zach LaVine reiterated Monday that he expects to stay with his new team for a while, despite the fact that he did not come to an agreement with the organization on an extension prior to the deadline for fourth-year players earlier this month.

"I think it's fine," LaVine said. "Obviously I want to be here for a long time. Like I said, I feel like the deal's going to get done, either [by the deadline] or next summer, so I don't have any fear in that. I think I know I'll be in black and red for a little bit longer. And I'm very happy and looking forward to that day as well, but my main concern is getting back on the court, getting my legs ready and try to help the team as much as possible."

The Bulls have been consistent about holding to a nine-month timeline as far as LaVine taking contact again in practice. LaVine suffered the injury Feb. 3, so being able to take full contact in about two weeks would put him right on schedule.

"Probably in the next two weeks I would say he'll start doing a little bit of contact," Bulls coach Fred Hoiberg said. "Probably three weeks he'll be back to full contact, if everything stays on schedule. But he's in a really good place. He's staying very engaged with everything. He's in all the meetings, film sessions. He's out here for practices. Just putting in a ton of extra work. He's on the floor more than anybody right now."

LaVine has started to participate in more pre-practice drills and acknowledged that he is already taking some contact "here and there."

"It all depends on them," he said. "I'm pushing them as hard as I can, but at the end of the day, we still got to be careful.

"I feel great. I'm doing everything I was doing before. I'm pretty sure I could do contact, but we got to stick to that schedule. But every day I'm just getting back, trying to get as close to 100 percent before as I can before I come back."

LaVine, who has quickly become one of the most popular players on the roster within the organization, said it has been tough watching the season start from the bench.

"It's definitely hard," he said. "I don't like missing games. Before the injury, I didn't really miss any games. I think I missed one or two in my career, so it really sucks just sitting there not being able to help. I try to help as much as I can from the sideline, give a little advice here and there, but yeah, it hurts. You want to be out there fighting with your guys. That day will come soon."

LaVine getting closer to resuming contact
Zach LaVine provides an update on his health and how he is integrating with the Bulls.
Report a correction or typo
Related topics:
sportsespnrehabzach lavinechicago bullscontractnegotiationsaclrecoverynba
Copyright © 2020 ESPN Internet Ventures. All rights reserved.
More Videos
From CNN Newsource affiliates
TOP STORIES