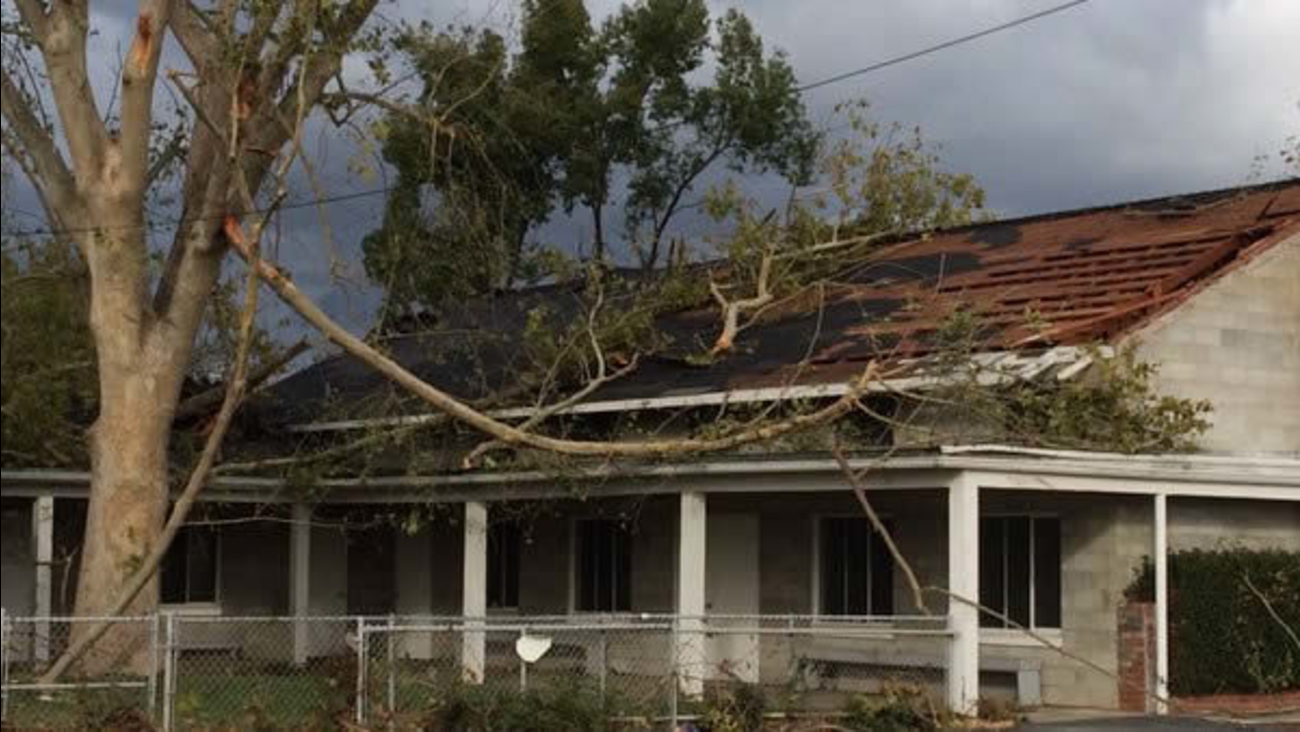 In this image, a church is damaged by a tree after it fell on top of its roof during a tornado that hit Denair in Stanislaus County, Calif. on Sunday November 11, 2015. (@StanSheriff/Twitter)

Officials say no injuries were reported.

Church roof has been damaged by the Denair tornado. pic.twitter.com/mbjrpVFz1P

Tornado traveled down Zeering Road in Denair headed east out of town. pic.twitter.com/H1lg6NO9y3

Denair tornado damaged some houses and knocked down several trees. No known injuries at this time. pic.twitter.com/43fOKB99bw

A cold front that whipped up a damaging tornado in a central California town moved south Monday, buffeting the Los Angeles area with gusts topping 60 mph.

Drivers in mountain areas were urged to use caution as light snow and hail fell at elevations as low as 4,000 feet. Powerful winds knocked down tree branches and caused scattered power outages across Southern California.

Windy conditions and cooler temperatures will persist for much of the day before a warming trend begins Tuesday, National Weather Service forecaster Kathy Hoxsie said.

To the north, a twister Sunday swept through the town of Denair near Modesto, toppling trees and fences, breaking windows and ripping off part of a church roof. Meteorologists planned to survey the scene and rate the level of damage on Monday. There were no reports of injuries.

Sabina Woodard said she took refuge with her husband, Zane, under the hospital bed in their home as furnishings, including their television set, flew about.

"What I thought was a bunch of birds was a bunch of debris" being carried by the funnel cloud heading their way, she told the Modesto Bee. "It looked like a remake of that Alfred Hitchcock movie 'The Birds.'"

The winter-like storm originating from the Gulf of Alaska brought hail and thunderstorms to parts of Northern California and the Sierra Nevada foothills. Rain and strong wind hit parts of the San Francisco Bay area.