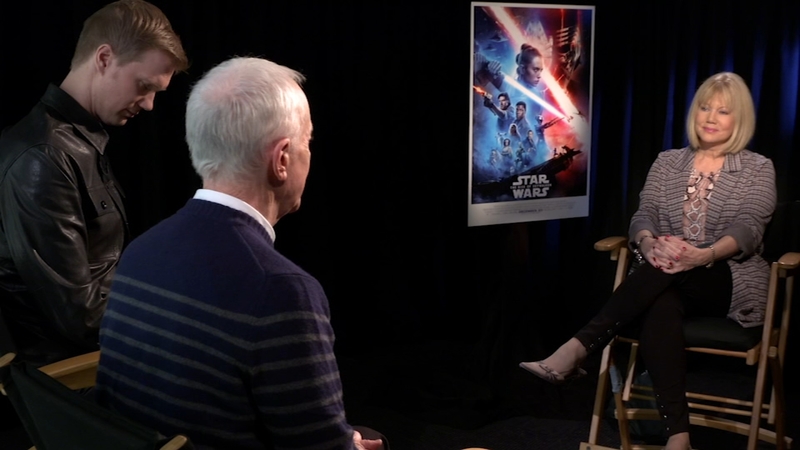 Since the first film, only one actor has been a constant through all nine Star Wars Skywalker films.

That would be Anthony Daniels, better known as protocol droid C-3PO. For him, the last day of filming on "The Rise of Skywalker" was bittersweet.

"Last scene was in a vehicle, of some description which I cannot tell you," Daniels said. "I was with two very favorite characters and actors and they both spoke, and I didn't say a word. How weird is that? 3PO has chatted away through all these films. Last day, nada."

Another favorite character, Chewbacca, naturally is back with the actor who took on the role starting in Episode 7.

"(I'm) doubly grateful, I'm always when I'm playing this character but this story felt special," Joonas Suotamo said. "We're going to end nine films, and to be part of that regiment of people working towards that goal - it was so epic an undertaking."

After the end of such a film run, one might wonder if you get a keepsake.

"All the Chewbacca stuff goes to crates, it's labeled and called up when it's needed again," he said.

Daniels isn't too upset about not getting any souvenirs, though.

"I'm getting of an age when I don't want stuff around. So it's OK," he said. "I have the memories, for heaven's sake. Can you imagine if you came into my home and there was a whole 3PO suit and you'd say 'a little weird.'"
Report a correction or typo
Related topics:
arts & entertainmententertainmentstar wars
Copyright © 2022 WLS-TV. All Rights Reserved.
TOP STORIES
LIVE: 15 killed in TX school shooting; death toll expected to rise
1 killed in 10-vehicle crash on I-294 in Glenview
Father of Texas yoga instructor accused in cyclist's murder speaks out
How to talk to kids about Texas school shooting
Illinois leaders call for gun control after deadly school shooting
Indiana lawmakers override veto of trans sports ban
Man fatally stabbed on train between downtown Blue Line stops
Show More
Senator begs for gun compromise after Texas school shooting: VIDEO
Evanston senior denied graduation walk for Native regalia on cap
Alderman Michael Scott resigns to work in film industry
Iraqi living in Ohio allegedly plotted to assassinate George W. Bush
Chicago Weather: Mostly cloudy
More TOP STORIES News